Top Ten Posts from A Summer Around the World

Happy May! Even as I am buried in outlining for final exams, recovering from strep throat, and preparing for a summer abroad in Uganda (!), I find myself reminiscing hard about this week last year–when I left NYC for 3.5 months backpacking around the world!

As part of my frolic down memory lane (and exam procrastination…) I’ve put together my top ten list of A Southern Yankee Abroad posts from last summer. Enjoy! ❤

#10 – Who knew three days without wifi or a shower with friends in Bolivia could be such an amazing and freeing experience! Girls Gone Wild: Three Days in the Bolivian Wilderness

#6 –  I did some soul searching in the most beautiful city — Paris, the City of Light. Questions in Paris

#5 – An encounter with a Buddhist monk in Chiang Mai reminded me that kindness transcends nationality, language, and religion. Wat’s Up?! Monks, Cooking, and River Cruises in Chiang Mai

#4 – I truly felt at home during a week-long visit in Provence, thanks to the generosity of some amazing people I met along my journey. Provence: Lavender Fields and Lost Luggage

#2- Being lost on the back of a motorcycle in the rain surrounded by people who don’t speak English in Ho Chi Minh City is a memory I could never have planned, but will always treasure. Adventures in Saigon

#1 – I turned 27 years old on top of a rainbow in Peru…literally! This trek up Vinicunca Mountain with Sarah, Rachele, our guide Abel, and Rainbow the dog was the highlight of the entire summer. A Birthday Trek to Vinicunca Mountain 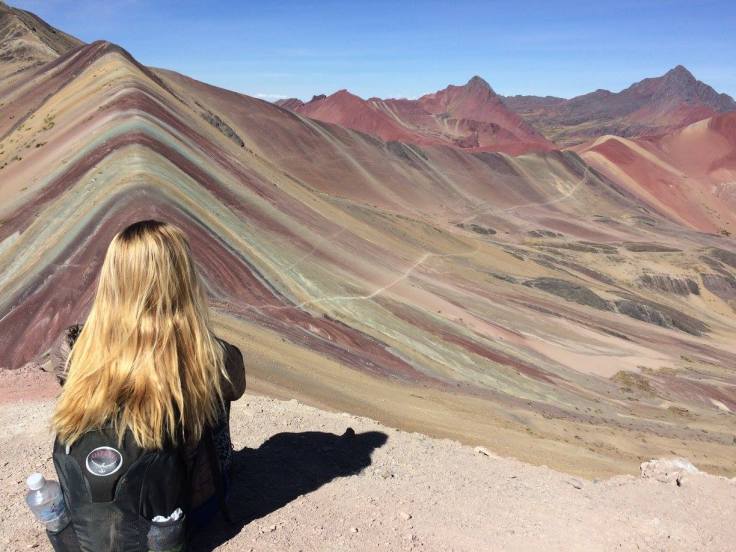 Kutna Hora and a Train Ride with Franz Kafka

My last few days in Prague have been full of ups and downs. After switching to my new (and much better!) hostel near Prague Castle, I spent a good bit of time wandering and exploring. I came across the beautiful Czernin Palace gardens, and then decided to make the trek up Petrin Hill to its lookout tower (which looks exactly like a miniature Eiffel Tower). As I trekked up the hill, I kept thinking of one of the eeriest scenes from The Unbearable Lightness of Being, which takes place on this hill (I don’t want to give any more away in case you want to read this book, which I recommend!) Surely enough, the rain started coming down. However, the view from the top of the lookout tower over Prague below was well worth it. 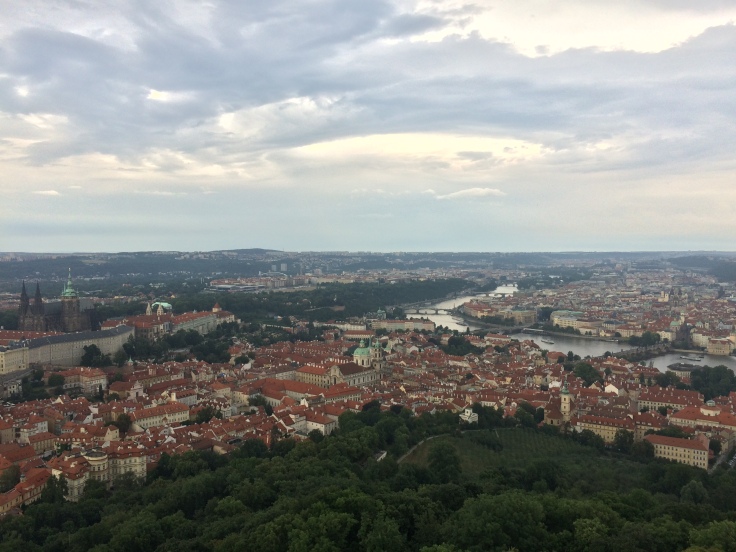 And then one high point became another low point. On my way out of the tower, I decided to stop by the ATM to take out 1000 CZK (about 50 USD). The machine  accepted my card and then put the cash out…except nothing came out. The transaction posted in my bank account anyway. I’ve never heard of this happening to anyone, and it’s the last thing I’d ever expect to happen! The manager of the tower claimed to not be able to assist, as another company manages the machine. So I set out back down Petrin Hill in the rain, 50 bucks poorer with nothing to show for it. The thought of calling my bank from Europe (Bank of America has no online chat service…ugh!) exhausted me, especially after several days of trying to sort my lost luggage with Germanwings (it’s still lost as of day 9) and several emails and a (costly) phone call with NYU Law that day to sort a registration issue.

I am absolutely aware that these are “first world problems” and I am extremely privileged to even be able to travel and have these issues in the first place. However, I still felt distraught. Sometimes solo traveling can be the best thing to gain perspective, get your thoughts in order, and know yourself more. And sometimes solo traveling isn’t as fun–especially when you just want someone with you to make you laugh and take your mind away from the string of unfortunate events. Two days later, my $50 and my luggage are both still lost. But, I have my health and the rest of my travels, so many friends and family
I love (even if they aren’t with me physically right now!), and my first semester of law school starting soon. So, in my opinion, life is good and I have a lot to be grateful for as I continue on the big adventure!

Things really came back into perspective for me the next day when I took a day trip to the Czech village of Kutna Hora. About 70 km from Prague, Kutna Hora was a major silver mining city during the medieval ages and competed with Prague for prominence as Bohemia’s most important city. It is a UNESCO World Heritage site. Also, my tour guide happened to be the husband of my fantastic guide from the walking tour 2 days earlier. They are officially my favorite Czech couple!

The first stop in Kutna Hora was at the famous Bone Chapel, filled with the bones of over 40,000 people who died from the bubonic plague and the Hussite Wars during the 15th century. Essentially, the city was running out of burial places for the plague victims, so their bones were used in the chapel to portray a message of “momento mori,” or remember the death, which highlights man’s mortality and equality before the judgement of God.

The chapel was redesigned in the 18th century and the bones were arranged in a baroque decorative style. There are 4 large pyramids of bones in the chapel, as well as a Schwarzenberg family shield made from bones. I found this chapel to be extremely eerie, and it definitely made all of the recent misfortunes of my travels seem small. 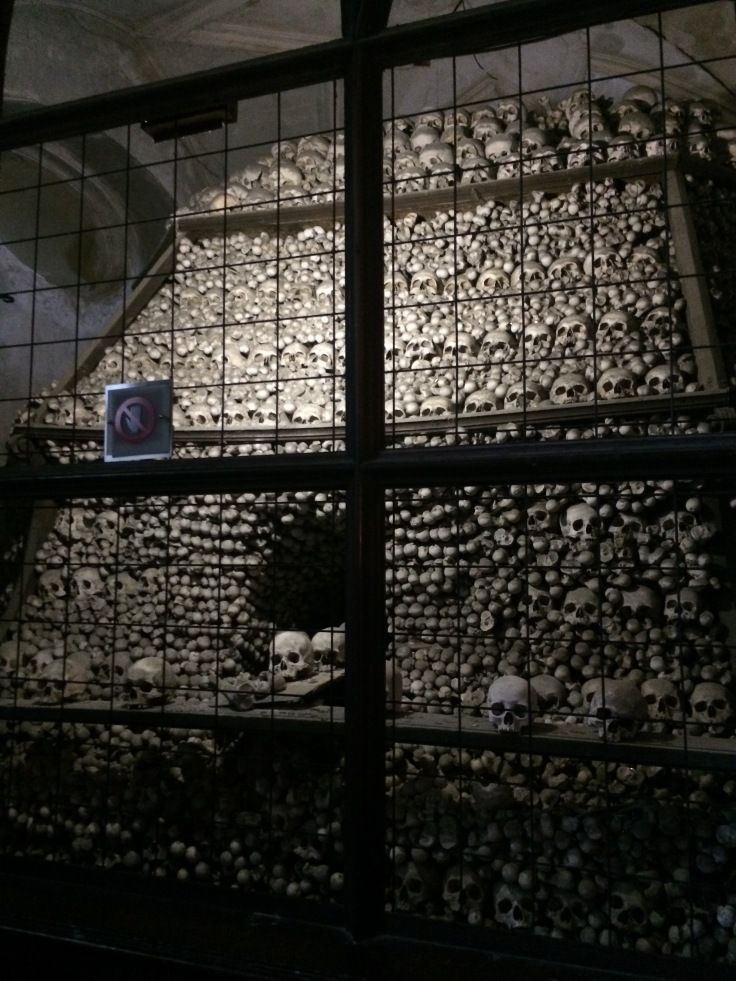 Kutna Hora is also the home of beautiful St. Barbara’s Chapel (it’s really more like a cathedral), a Jesuit monastery, and an Italian-style court where the King of Bohemia lived for a time. After visiting all of these places, we had a delicious lunch at a Czech restaurant before heading back to Prague.

As I prepared to leave Prague by train to Budapest the next morning, I stopped by to see the astronomical clock in the Old Town Square one last time. The astronomical clock was built in 1410 and is the oldest such clock in the world still in operation. Every hour, the skeleton (representing death) and other figures representing sins and vices chime and perform as the 12 disciples parade by a window that opens, followed by a crow and wing-flap from the golden rooster atop the clock. (It sounds ridiculous, but you just have to see it to believe it!) The clock shows the position of the sun and moon as they relate to the Earth, as it was constructed in a time when people still thought Earth was the center of the universe. It also shows the 12 signs of the zodiac. Even though the “performance” of the figurines isn’t much to watch, I found it charming and unique to watch both times I stopped by (especially considering its age and how advanced it was for its time…it was like the iPhone of 1410!) 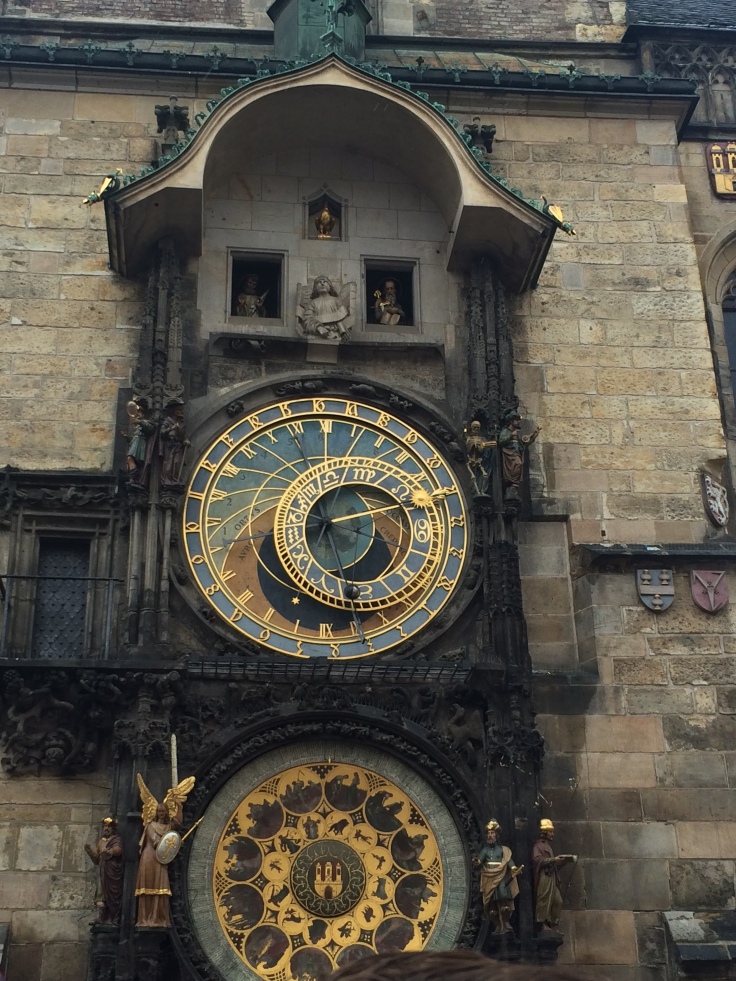 Once I boarded the train for Budapest, I settled in with a collection of Prague native Franz Kafka’s short stories, including Metamorphosis. I found myself laughing out loud as I read Metamorphosis on the train, in which a traveling salesman wakes up one morning as a giant bug and then must figure out how to handle his employer and family. An appreciation for Kafka, who was originally from Prague, is a fun takeaway for me from this part of the trip, as I wasn’t deeply familiar with his writing before visiting. However, while in Prague I learned a good bit about this early 20th century writer and what makes something “Kafkaesque.” Miriam-Webster dictionary describes “Kafkaesque” as “having a nightmarishly complex, bizarre, or illogical quality” and as “often applied to bizarre and impersonal administrative situations where the individual feels powerless to understand or control what is happening.” I have decided there is no more appropriate word to describe my debacle with my still lost luggage and the ATM than “Kafkaesque.” And how fitting that it happened in Prague, Kafka’s hometown.

While I appreciate Prague and Kafka’s work, I am hoping the luck of the Irish will return to me in the last 2 weeks of my travel.