Top Ten Posts from A Summer Around the World

Happy May! Even as I am buried in outlining for final exams, recovering from strep throat, and preparing for a summer abroad in Uganda (!), I find myself reminiscing hard about this week last year–when I left NYC for 3.5 months backpacking around the world!

As part of my frolic down memory lane (and exam procrastination…) I’ve put together my top ten list of A Southern Yankee Abroad posts from last summer. Enjoy! ❤

#10 – Who knew three days without wifi or a shower with friends in Bolivia could be such an amazing and freeing experience! Girls Gone Wild: Three Days in the Bolivian Wilderness

#6 –  I did some soul searching in the most beautiful city — Paris, the City of Light. Questions in Paris

#5 – An encounter with a Buddhist monk in Chiang Mai reminded me that kindness transcends nationality, language, and religion. Wat’s Up?! Monks, Cooking, and River Cruises in Chiang Mai

#4 – I truly felt at home during a week-long visit in Provence, thanks to the generosity of some amazing people I met along my journey. Provence: Lavender Fields and Lost Luggage

#2- Being lost on the back of a motorcycle in the rain surrounded by people who don’t speak English in Ho Chi Minh City is a memory I could never have planned, but will always treasure. Adventures in Saigon

#1 – I turned 27 years old on top of a rainbow in Peru…literally! This trek up Vinicunca Mountain with Sarah, Rachele, our guide Abel, and Rainbow the dog was the highlight of the entire summer. A Birthday Trek to Vinicunca Mountain

After leaving Hoi An, we made the 4 hour drive north to Hue (pronounced hway). Hue is the former capital city of Vietnam, and is full of history. After checking into the hotel and having a banh mi for lunch (so delicious and only 20,000 dong, which is less than 1 USD!) I went on a motorbike tour of the city and surrounding countryside. Riding through the rice fields with the mountains in the background was one of the most peaceful and reflective moments I’ve had on this trip. 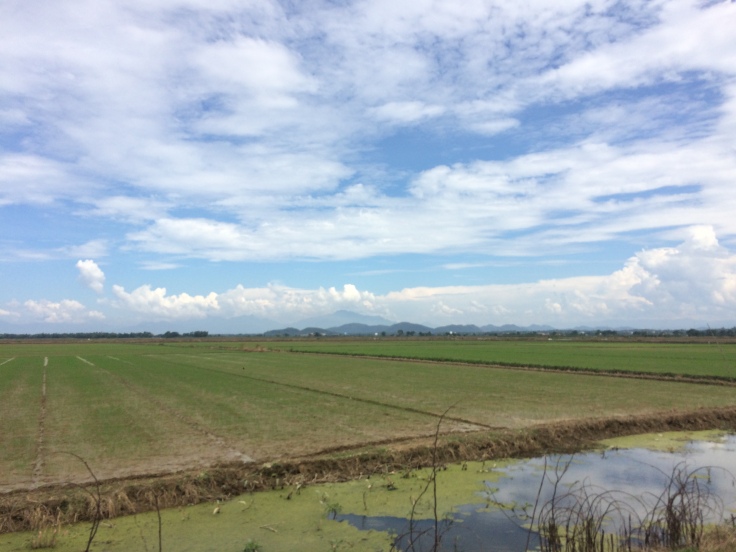 We stopped at several interesting places along the way, including a Japanese bridge, the Tu Doc tomb, Bunker Hill, an incense shop, a coliseum where elephants and tigers would fight in front of the king, and Thien Mu pagoda. We also stopped at the Citadel that surrounds the Imperial City on the way back.

Bunker Hill was my favorite stop that afternoon. Both a French and American bunker remain on top of the hill from the French and US wars respectively, and the view of the Perfume River below is absolutely beautiful.

The Tu Doc tomb was also interesting. The king who was buried here apparently had 104 wives but 0 children, and his exact location of burial on the grounds is unknown so as to thwart grave robbers. The Chinese symbol for longevity appears throughout the complex. 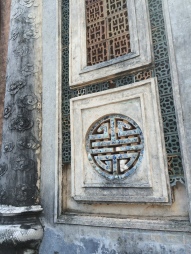 The Thien Mu pagoda was also a really unique experience. The monks were having a ceremony when we arrived, so it was special to see how they did this. Also, the pagoda has the car driven by the monk Thich Quang Duc in Saigon the day he publicly set himself on fire in protest of Diem’s regime in 1963. Diem was the leader of South Vietnam at the time and was supported by the US. Diem heavily discriminated against Buddhists in his governing policies, thus prompting Duc’s infamous protest. Several monks followed his example to protest in the following weeks. 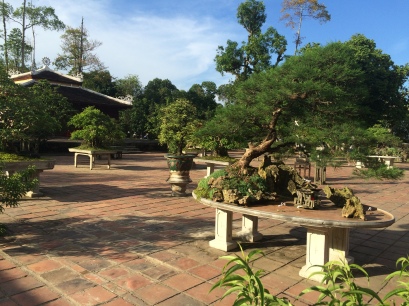 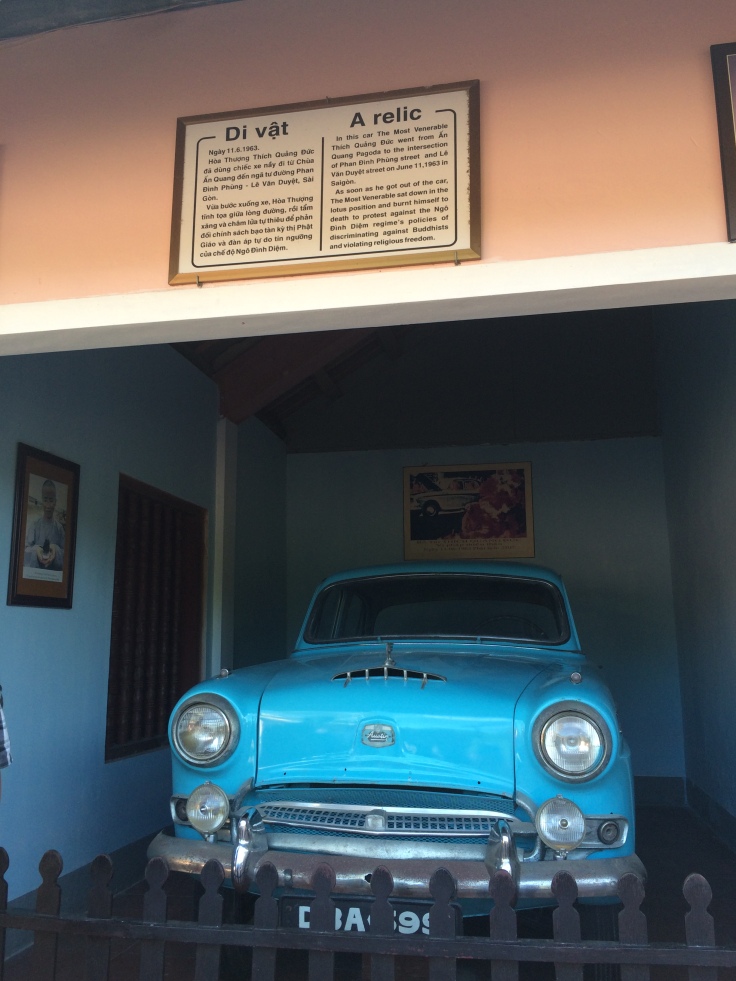 The next day, I chose to sleep in instead of visiting the Citadel (being a tourist can be exhausting and I need to pace myself!), and then our group set off for a 14 hour train ride from Hue to Hanoi. The stay in Hue was a little too brief for me, but I’ll hopefully visit again at some point!

After a 14 hour train ride to Hanoi and a 4 hour bus ride north to Halong Bay, I was definitely ready to relax and take it easy! Ha Long Bay is located in the northern end of Vietnam and is quickly becoming a top tourist destination. It was interesting to visit the town and see how it is still developing, as it seemed a little empty at first. However, the biggest highlight here is the natural beauty of the over 3,000 rocky islands scattered throughout the bay. After a quick dip into the bay at the beach, we headed to the harbor to get on a junk boat, the Song Bien, for an afternoon cruise. As soon as we boarded, we were served a full lunch of fish, spring rolls, rice, noodles, vegetables, squid, fries (or chips as the British call them and I’ve found myself saying), and stir-fried morning glory. After lunch, we spent some time hanging out on the sundeck and looking at all of the beautiful scenery. Perhaps the highlight of the sightseeing was passing the famous “kissing chickens” islands. 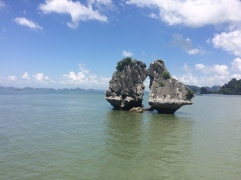 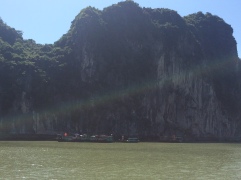 Then, we arrived at the Ba Hang lagoons and went kayaking. You can only reach the lagoons by kayak and it was really peaceful! Then, we hopped back on the junkboat and went to the Thien Cung cave. Our guide explained all the legends around the rock formations and the shadows. Apparently, the legend is that a dragon prince married his bride in the cave and all the animals in the jungle attended the wedding (you can see them in the rock formations…really cute!) 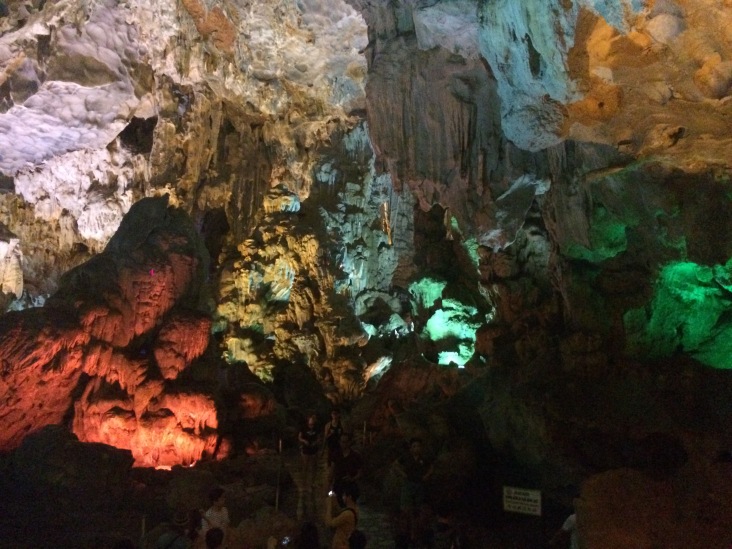 It’s hard to believe my last stop in Asia is next up…Hanoi, the capital of Vietnam. It’s gone by way too quickly.