This weekend, I had a chance to visit one of Uganda’s most famous natural attractions—Murchison Falls. (In keeping with the waterfall theme and because I’ve slacked on the blog this summer, I will also write about a trip I took about a month ago to Sipi Falls, a lesser-known but beautiful hidden gem in Uganda’s eastern region).

As my summer has been so busy with work (which has been super rewarding, and I love my officemates so much!) and the weekends have been filling up quickly, I was sad to think I wouldn’t have time to visit Murchison Falls at all before leaving Uganda. Imagine my joy when Diana suggested I take a day off to get one more good traveling weekend in! 🙂 Because Murchison is best visited over a minimum period of 2 nights and 3 days, I knew then that I could make it. My friend Daan put me in touch with his friend Nathan, who was taking a group there the following weekend. It was a done deal!

Friday morning, I met a group of 7 other travelers—4 Ugandan, 2 Lithuanian, and 1 Italian (I didn’t get asked about Trump once, thanks goodness! How refreshing!)—and we set off northwest for Murchison.

Our accommodations were in a small village just outside the park known as Pakwach in the West Nile region of Uganda. Pakwach is much more rural and less developed than many other parts of Uganda I’ve visited. The local villagers were extremely friendly, and even welcomed us to visit their homes and farms.

So, the guesthouse…each night at midnight, the electricity cut off, my water stopped running twice, and I was eaten by mosquitoes (fingers crossed I don’t get malaria!). I want to get all of the negative out of the way to go on to say that the food was AMAZING. Everything was so fresh. Home-cooked fresh fish from the Nile, chapatti, rice, beans, some type of greens called doh doh (not able to confirm this spelling on Google, lol), fresh fruits, and fresh cabbage (my favorite)! Breakfast in the mornings were fresh eggs, chapatti, and/or toast.

At 6:30am Saturday morning, we set out for the park entrance, eager to see some animals!! 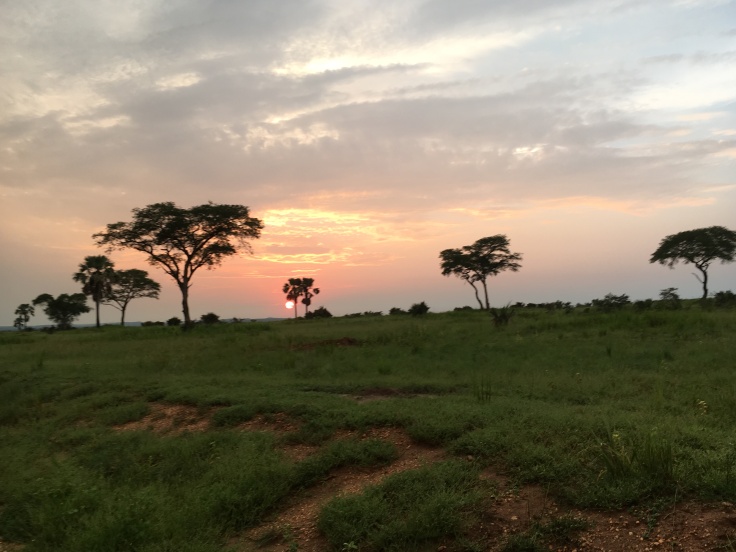 Like in Queen Elizabeth, I saw a leopard up close…we were even able to see him walk down the branch from the tree! 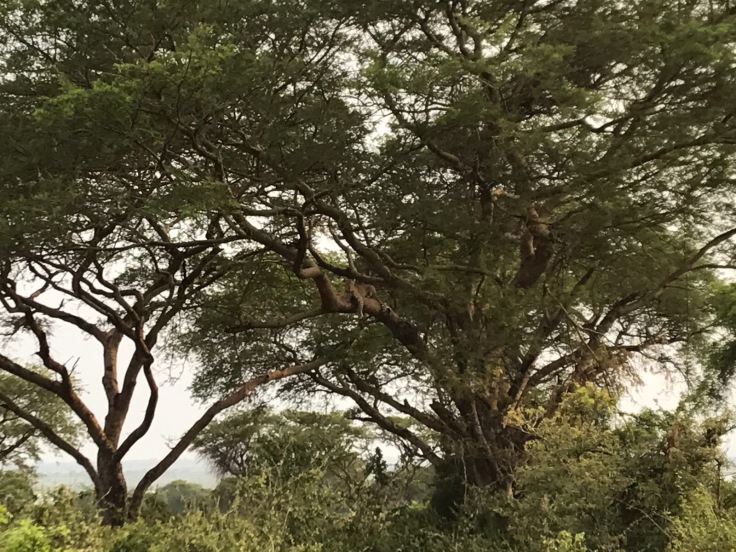 We also saw a few pairs of lions in the far distance twice. You could only see them through binoculars. Our guide informed us it was mating season, and these pairs had been spotted together over the course of the last week. * Cue “Can You Feel The Love Tonight” from the Lion King*

One amazing thing that Murchison Falls had that Queen Elizabeth did not have was giraffes! There were so many, and they would come very close to our truck. 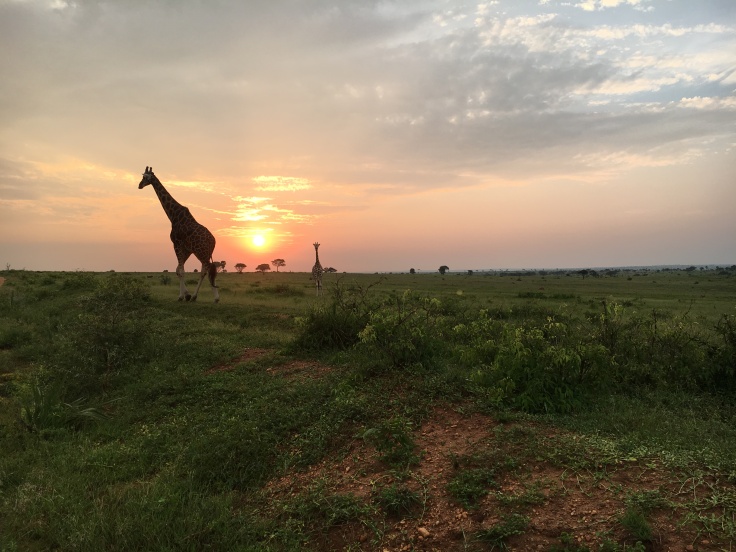 I also saw many elephants, buffalo, kob, bushbuck, and waterbuck. We even saw a hyena!

To me, animals will always be the highlight of any safari. But the main waterfall at Murchison certainly gives the animals some competition! After lunch, we drove up to the top of the falls—where the entire force of the Nile river rushes through a rock crevice only 6 meters wide and crashes 53 meters below, to continue its flow north through South Sudan, Sudan, and Egypt. 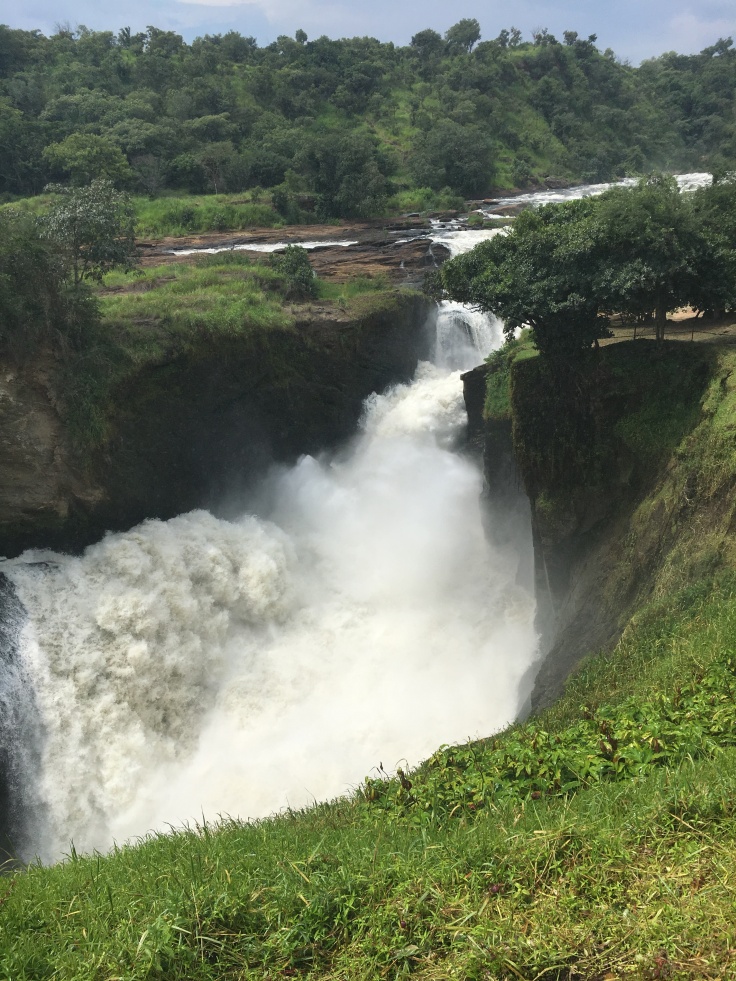 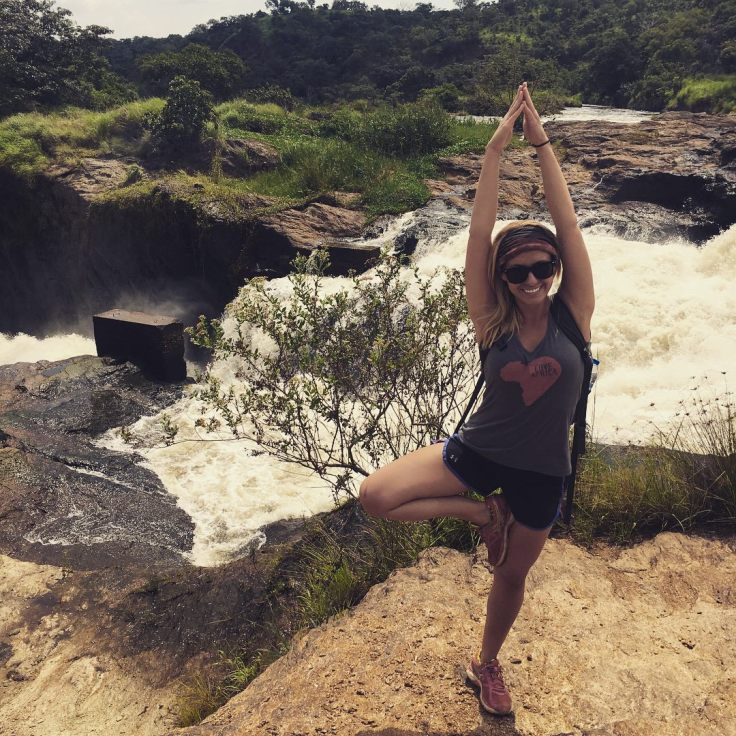 Murchison Falls is the location of 2 historic events I was totally geeking out about before visiting. 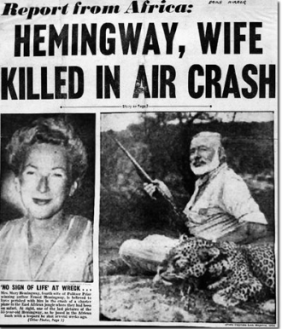 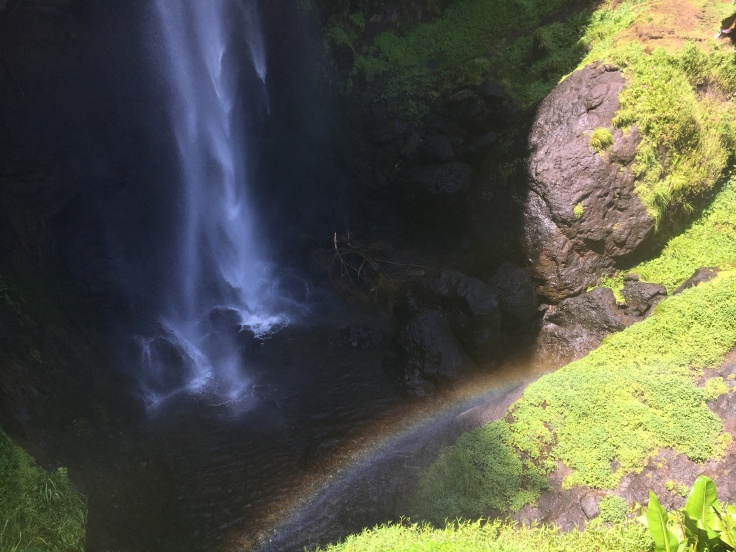 Last month, I took off on a solo hiking day trip to Sipi Falls, located in Kapchorwa district, northeast of the major town of Mbale near the border of Kenya. My faithful boda guy Calvin picked me up at 5:45am and drove me to meet my driver for the day, Moses. Moses and I then continued on for the 5 hour drive to Sipi, and we had a lot of time to talk in the car. Moses even taught me some Lugisu, the native language of the Bugisu tribe of Mbale (like Luganda is the language of the Buganda people of central Uganda, which I’ve been learning a bit). Lugisu sounds similar to Luganda, because both languages are derived from the Bantu language group.

After passing the giant Mount Elgon, which is believed to be the oldest extinct volcano in East Africa, we arrived in Sipi, where I met up with my guide Juma. Juma is a native of Sipi and knew literally everything about the falls and the surrounding area. The hike to and around each of the falls took about 4 hours total. The hike took us across farmland and through local villages. The fees paid to hike the falls go back to the people who live on the land and open it up to visitors. The lush green of the land was striking.

There was a pool between the first and second waterfall, where local women were washing their clothes. Sometimes visitors will swim here, but I didn’t want to disturb these ladies. I sat with them for a while before thanking them for letting me visit and continuing on. 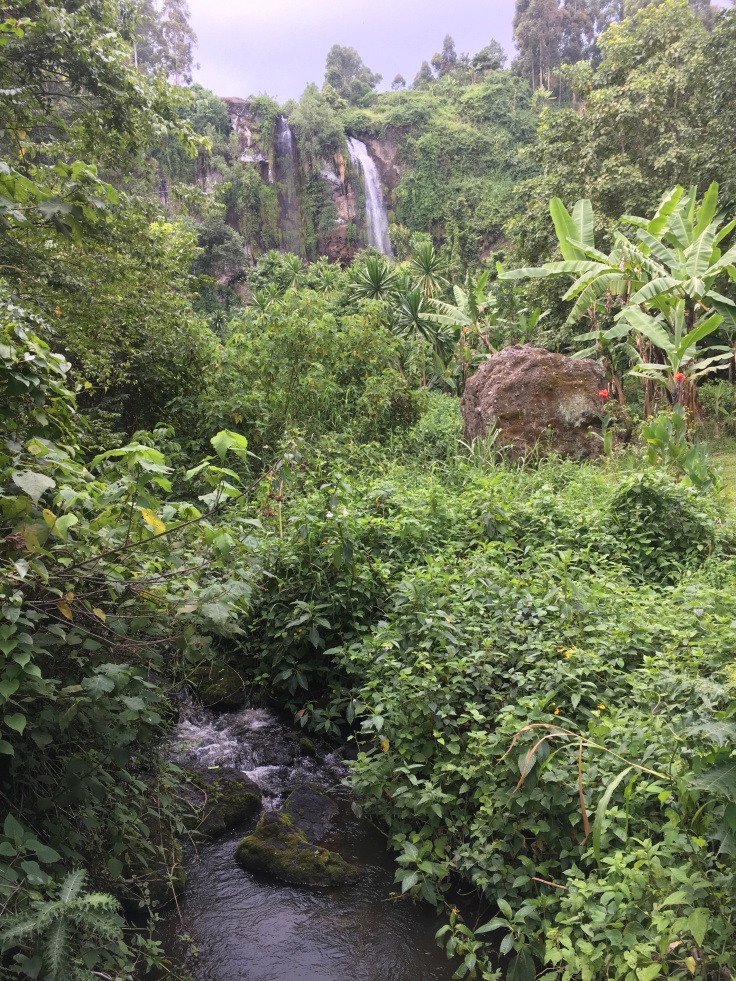 The second waterfall had a cave! 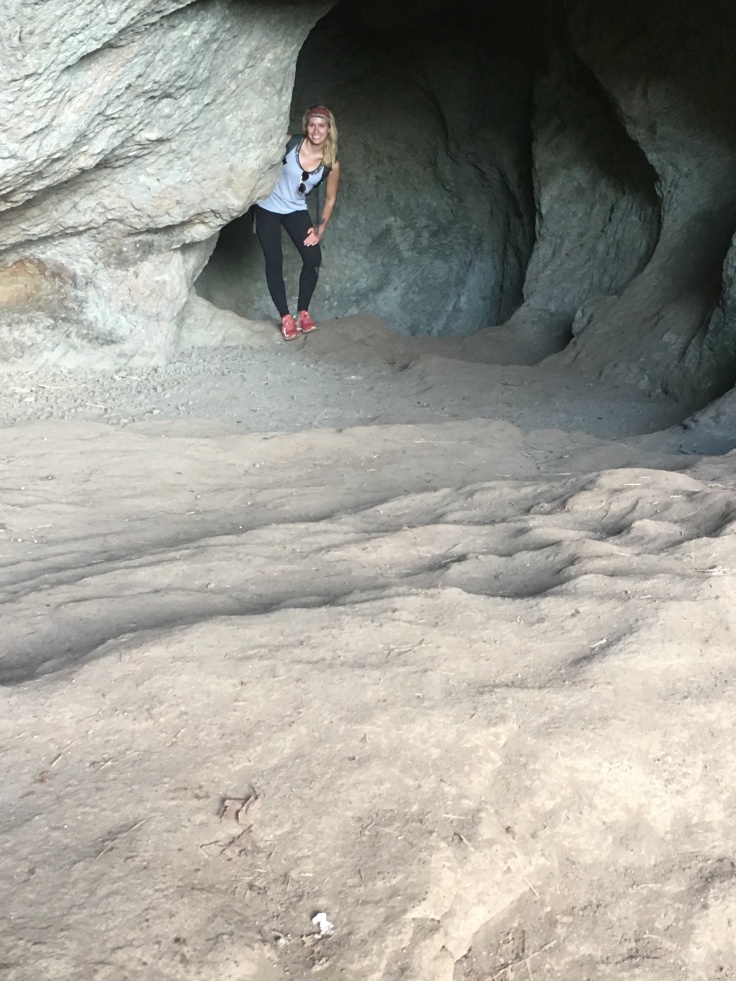 The third waterfall was by far the most difficult to access. It was very hilly, and the day had gotten hot by now. Plus, something about the soil was super slippery, and I kept falling! Juma gave me some hilarious advice—“walk with less energy!” Those of you who know me know I’m a fairly energetic person, so I tried to put a bit more chill in my step, and it worked! I didn’t fall anymore. I was blown away by the fact that, as I struggled in my sneakers with a small backpack, local women would pass by barefoot with loads of freshly harvested crops loaded on top of their heads, effortlessly scaling the slopes. Talk about staying humble!

Sipi is also well-known for its coffee, and Juma offered me a tour of the coffee farms, but I was so exhausted by this point that I opted to head back to Kampala. I was so hungry because I hadn’t eaten all day!! Moses and I stopped in Mbale and bought the most delicious fresh Rolex (not the watch, but a Ugandan delicacy made out of egg and chapatti) and fried cassava. I bought dinner for both of us for the equivalent of just 1 US dollar (~3,600 shillings).

I got back home around 10, took a hot shower, and crashed into bed after such a full day. 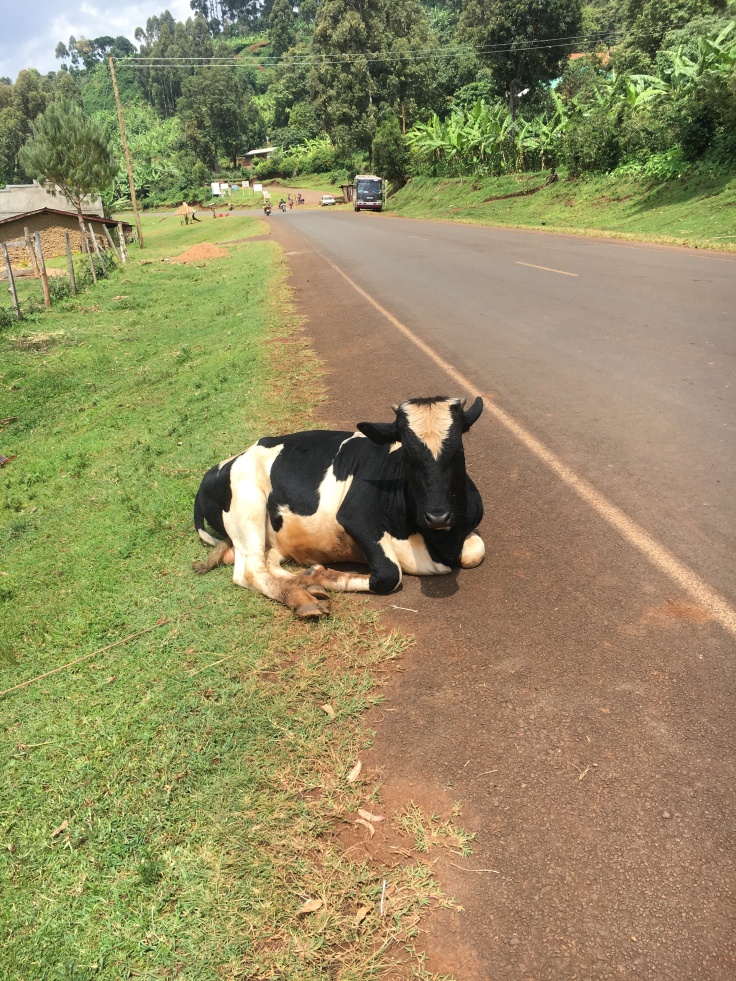 TLC advised “don’t go chasing waterfalls, please stick to the rivers and the lakes that you’re used to” but I just cant help it…I love waterfalls, and Uganda has some good ones! Between Murchison and Sipi, I feel so lucky that I’ve been able to take in so much of the natural beauty of Uganda before I head home next week.