I’ve spent the last few days visiting the Cambodian cities of Phnom Penh and Sihanoukville. Phnom Penh is the capital of Cambodia. Here I visited the killing fields and genocide museum (which you can read about here). In the afternoon, I explored the city for a while on my own and ended up visiting the National Museum of Cambodia. It reminded me of the Met in NYC except much smaller and with only Khmer artifacts. There is a beautiful garden in the middle of the museum, where I spent some time reflecting. I also met an older British man here who was visiting Cambodia on “holiday” (what the Brits call vacation…I’m adopting this phrase!) and he ended up giving me some good life advice!

After meeting back up with my group at the hotel pool, we went to happy hour drinks at F.C.C. (Foreign Correspondent’s Club), which is apparently a well-known ex-pat bar. I really liked the neo-colonial vibe here. The bar featured riveting photography documenting the recent history of Cambodia.  Also, the sunset over the Ton Le Sap River was very nice! After cocktails, we went to dinner at Friends, a local restaurant that supports non-profit work in the city (thanks for the recommendation, DJ!) and then on to a rooftop bar with a great view of the city!

The next day, we traveled to Sihanoukville, which is known as a backpacker’s beach town. The vibe here was very chill.

We spent the first afternoon on Otres Beach, and then took a boat out the next day for snorkeling, swimming, and barbecue on Bamboo Island. While the snorkeling was not as clear as some times I’ve been in Florida and Mexico, it was still very cool to see so many large sea urchins in the crevices of the coral. My favorite part was the boat ride back to Sihanoukville from the island–the water was super choppy and everyone got soaked over and over again!

Alexa’s and my hotel room in Sihanoukville was very…interesting, complete with lizards and an earthworm in the bathroom (I definitely wore my shower shoes) and a door handle that fell off on our last night. Fortunately, the hotel sent a guy to replace the our knob in the middle of the night…quite the adventure.

Now, it is off to Vietnam with the first stop being the Mekong Delta. Cambodia has been both beautiful and heart-breaking. I would love to return to this country at some point in the future. It has definitely made an impression on me.

On Thursday morning, I visited the Chueng Ek killing fields and S-21 prison in Phnom Penh. I cannot put what I witnessed and learned into words, but I feel like it’s crucial to attempt to share this information. This post is quite difficult to write, and please be warned that some of the information shared is graphic and gruesome. However, in the words of Chum Mey, one of the survivors I met, it is important that the world knows what happened. 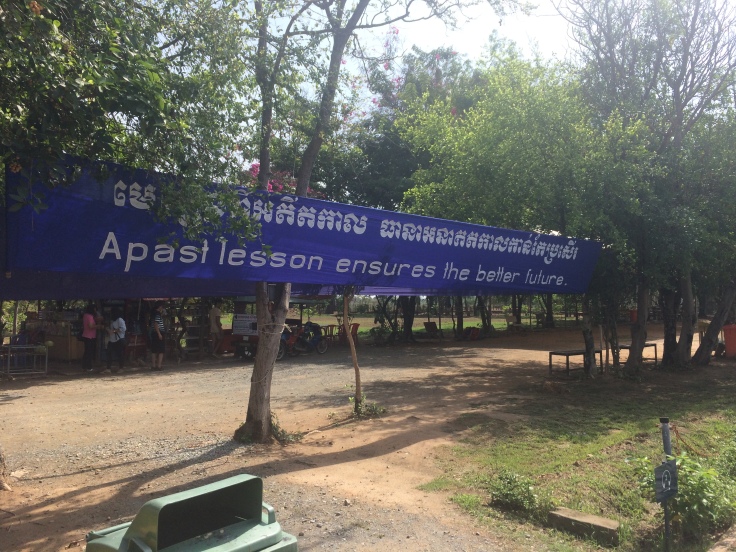 Between 1975 and 1979, 3 million Cambodians died under the Khmer Rouge regime. 1.7 million were murdered, and the rest died of starvation. The effects are evident in the demographics of the country today–only 5% of the people are over 65 years old, with 50% of the population under 20 years old. Only 15% of people with an education survived the genocide.

In 1975, a man known as Pol Pot came to power in Cambodia. His regime was known as the Khmer Rouge, or the Angkar. He won over the people in the countryside by delivering food and supplies to their villages, and promising a better life through communism for his people. However, his leadership soon turned into a reign of terror, as people were forced out of their homes and into hard labor camps in the countryside. Food was severely controlled and restricted, and many people died of disease and starvation as they labored under the control of Khmer Rouge soldiers.

“There are no diplomas, only diplomas one can visualize. If you wish to get a Baccalaureate, you have to get it at dams or canals,” stated one Khmer Rouge slogan.  Although Pol Pot himself had been educated at a university in Paris, he banned all schools and arrested, tortured, and murdered educated people. If one member of a family was educated, the whole family was taken to prison, including the elderly, babies, and children. Teachers, doctors, policemen, and other professionals who could read and write were all targeted, as well as their families

From the prisons, the people were taken to a killing field, where they were brutally murdered. Because the Khmer Rouge thought bullets were too expensive, they used hammers, bamboo sticks, and cleaning rods to murder their victims. They would blindfold the victims and have them kneel in front of a mass grave, and then hit them from behind before pushing them into the grave. Many were buried alive. The murderers would bash babies against trees to kill them as their mothers watched. If the murderers noticed a victim was still alive, they would slit their throats with a tree branch.

I visited the killing field at the Chueng Ek Genocidal Center outside of Phnom Penh, but there were 343 such “killing fields” across Cambodia. Despite excavation, there are still human bone fragments scattered throughout the field, even in the walkways. When it rains, bone and clothing fragments still come to the surface of the soil. There are still blood stains on the tree where babies were murdered. As I walked through, I found myself without words and then asking how God could allow this to happen.

After the killing field, we visited the S-21 prison in Phnom Penh. This is where 17,000 prisoners were held during the Khmer Rouge regime. Out of 17,000, only 7 survived. The guards tortured prisoners with electrical shocks, acid, beatings, and salt water over wounds in an attempt to extract information that would aid the Khmer Rouge. Prisoners were forced to use a small metal box for their bodily waste, and it was only emptied once every 2 weeks. If it spilled before then, they were forced to clean the floor with their tongues. Prisoners often ate bugs and rats that crept into their cells to avoid starvation, and many starved anyway. 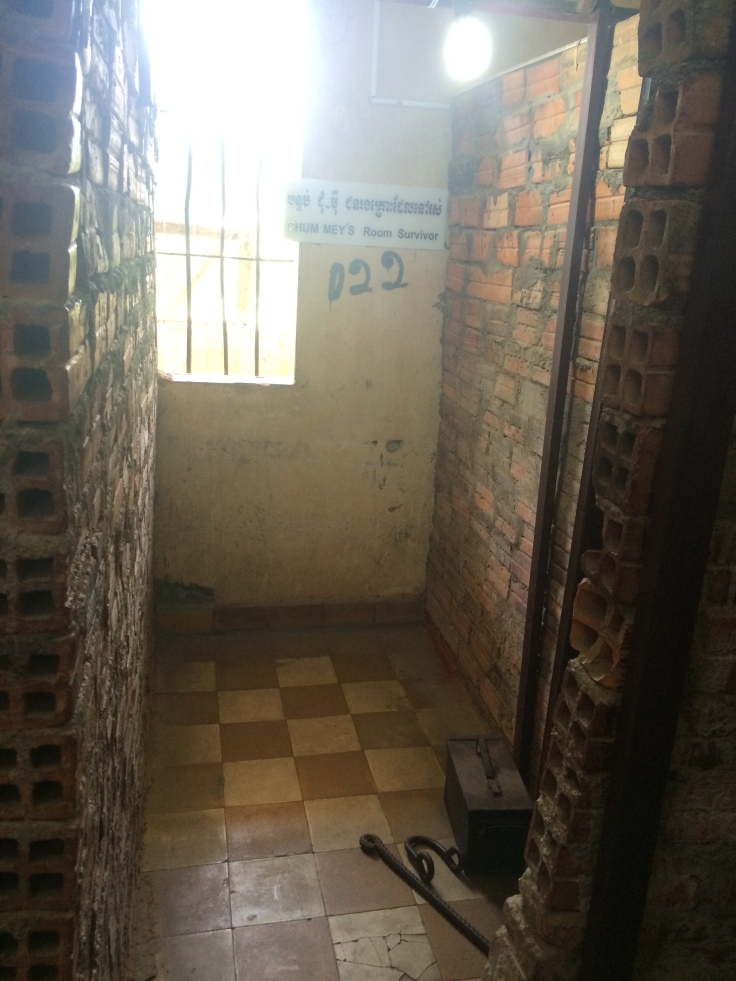 Of the 7 survivors, 2 are still alive today. I was able to meet both Chum Mey and Bou Meng, who have written books about their experiences and now work to educate visitors about the genocide and seek justice. Bou Meng, his wife, and their 2 children entered S-21 in 1975, and he never saw them again. Bou Meng was an artist, and he was able to survive because the Khmer Roge commissioned portraits of Pol Pot and other communist leaders from him. Every day, he was tortured and wondered if it was his last day to live. He did not learn his wife’s fate until 2008, when he confronted his torturer face-to-face at the ECCC trial. He there learned that his wife had been murdered at the Chueng Ek killing field. He still carries her picture in his wallet.

Bou Meng’s story was published as part of a dissertation by a Rutgers student.  The following excerpt stands out to me: “Now, he said, the ghosts of those who died follow him, hovering over him in the dark, still skeletal from starvation, still wearing the black clothes that were the uniform in Khmer Rouge times. They gather in front of his home, calling out to him to represent them and to find justice for them.”

Justice is still lacking. Many former Khmer Rouge leaders and soldiers are part of the modern government. In fact, the US, Britain, and other democratic countries still recognized Pol Pot as the leader of Cambodia until 1991, despite his evil atrocities. Him Huy, who was the head guard at S-21 and personally tortured Bou Meng, still accepts money to give tours of the prison and to talk to journalists. The history of the genocide is not taught to Cambodian students at all in school, because the government is still trying to hide what happened as much as possible. It is our job to be educated about this, to seek justice for these victims, and to ensure that this never happens again in our world.  Cambodia is still recovering from this period of history, and it is very evident in the infrastructure, healthcare, and education systems in the country. We need to do everything we can to help this country move forward and heal, and to ensure its future includes hope and justice.