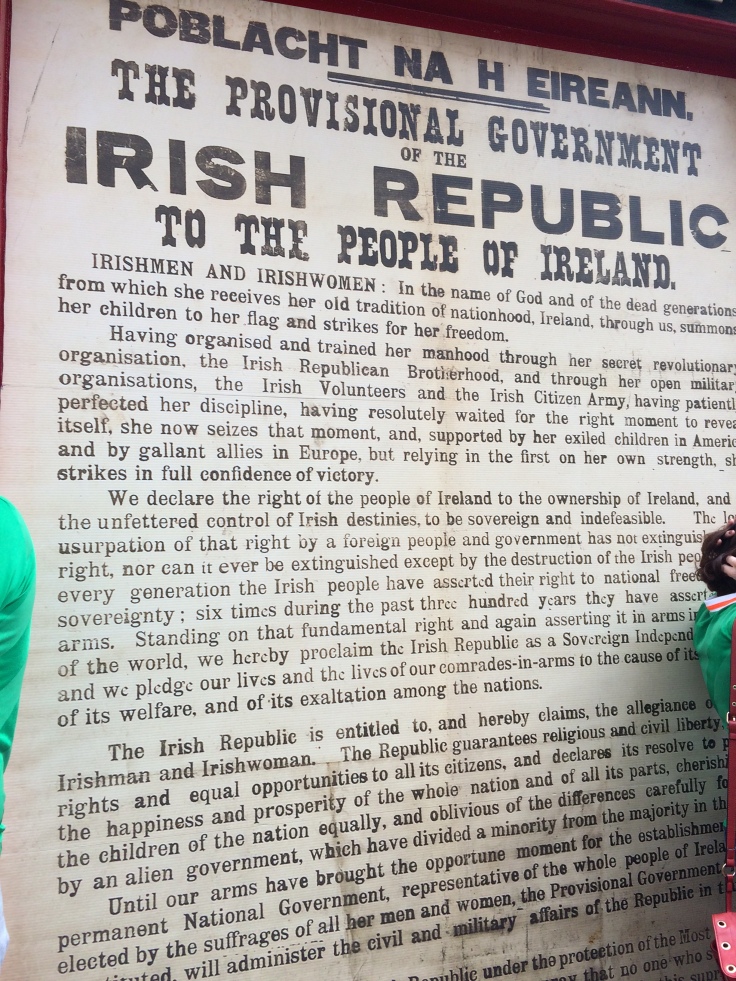 Even though I am across the Atlantic, I have felt perfectly at home in Baile Atha Cliath (“Dublin Town” in Gaelic). Perhaps it is due to coming away from a rough (but fun!) 3 weeks in South America, but I feel like I have had time to fully recover and enjoy myself here already. And I still have almost a week left here!

I arrived to the Dublin Airport from Madrid Thursday evening–cold, tired, and exhausted. Michael picked me up and immediately began nursing me back to health (he is such a great friend!) I took a long, warm shower (my first real one since Asia!), and Michael gave me an amazing lotion to help with my wind-chapped hands. I turned in to bed around 11pm, right as the sun was going down. In Ireland during the summer, the sun does not set until 11pm and it rises at 5am!

The next morning, Michael woke me up with news of the Brexit. I had been watching the vote as I drifted to sleep, and at the time it appeared the UK would stay in the EU. Therefore, I was shocked at the news as I woke up. My initial reaction was fear of the implications for the US–if Britain could vote itself out of the EU at 51% largely due to opinions on immigration, does it mean it is possible for my country to elect Donald Trump along the same line of reasoning? Sadly, I now think the answer is yes. And this horrifies me.

Several conversations I had with Irish citizens throughout the weekend confirmed my fear–there is a strong global right-wing movement that is growing and eroding the foundation of rational, moderate political discourse. One Irish woman I met while shopping said, “Happy Brexit! Welcome to the beginning of the end!” Another man laughed and said it was entertaining to watch the “great empire” crumble on itself (I can understand where his bitter sense of humor comes from, given what I’ve learned (or been reminded) of Irish-British history in the last few days).

The Irish are mainly concerned how the Brexit will affect border controls with Northern Ireland. As it stands now, traveling to Northern Ireland is as simple as crossing the border from Alabama to Georgia. However, now that Ireland remains in the EU with its open borders, and Northern Ireland is part of the UK, the open border policy is likely to change over the next 2 years (for the worse, in the opinion of many Irish), unless some extra agreement is reached. Some Irish believe there could be positive economic development and investment repercussions for them, as Ireland is now the only English-speaking nation in the EU.

Still in shock from the Brexit news, Michael and I went for a traditional Irish breakfast and then for a morning of shopping. We then walked around Dublin for a bit, stopping for ice cream at Murphy’s and for a “pygtail” (cocktail) at Pygmalion.

We also saw Joe Biden pass by in his motorcade! This was quite funny to me, as I also saw President Obama’s motorcade pass by in Saigon earlier in the summer. As one friend asked, am I following them or are they following me?!

On Saturday, we woke up bright and early for the Rainbow Run 5K at Dun Laoghaire West Pier along Dublin Bay. The weather could not have been more perfect! I was quite nervous, as this was my first time to really run since the beginning of May and I had a sore knee from my spill in La Paz. However, the race was a lot of fun, and Michael and I both did well! We were also covered in all colors of the rainbow by the very end (which was simply flour with food coloring…haha). 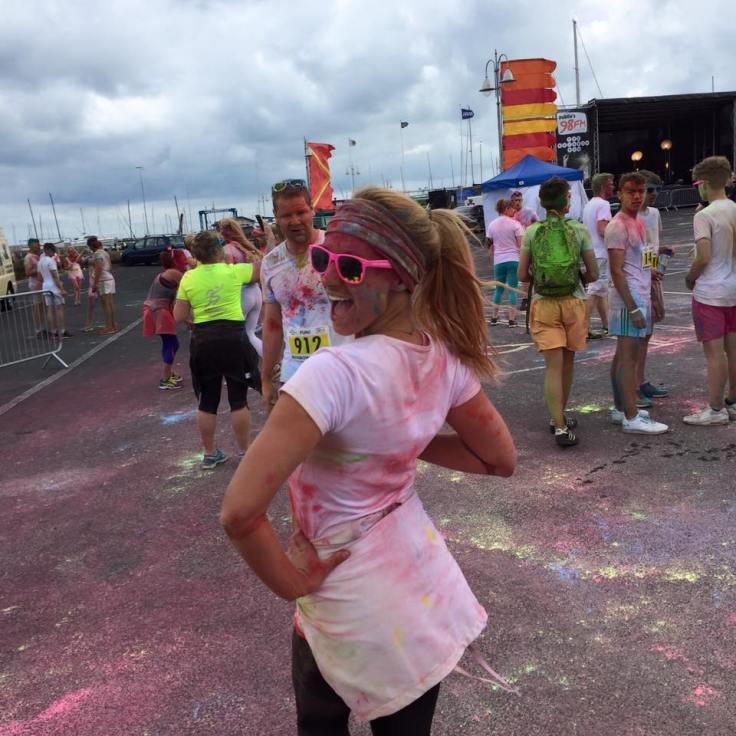 After we cleaned up from our run, we made our way to downtown Dublin to join in the annual Dublin Pride parade. Michael was kind enough to invite me to march with his hiking club–Out and About. This was my the first pride march I have ever participated in, and it was truly an honor to show solidarity with and support for my LGBT friends back in the US and across the world. 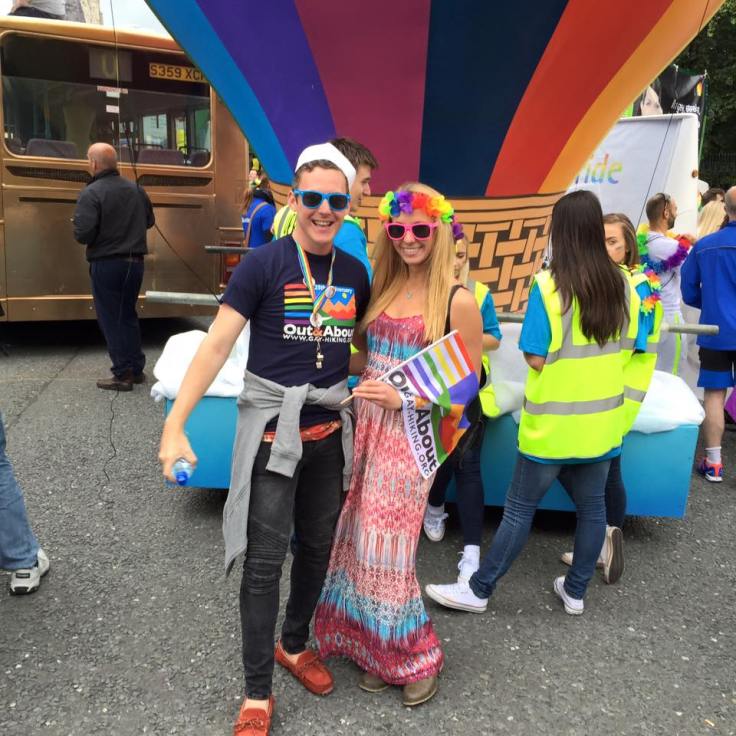 The Pride parade started in 1969 in NYC as a public response to the Stonewall Inn riots, and has expanded to cities across the globe in the decades since. Last year, around the same time the US SCOTUS came out with the decision to legalize same-sex marriage across the country, Ireland became the first nation to legalize same-sex marriage through a constitutional amendment. Several major companies had floats in the parade, including Amazon, Google, LinkedIn, and Accenture. In fact, Accenture was handing out American flags for demonstrators to show support for the victims of the recent Orlando tragedy, and they gladly shared one with me. I was blown away by the amount of Dubliners who came out to show support for the LGBT community along the parade route. There was truly an atmosphere of love and acceptance in the city, and I felt it was one of the most beautiful events I have ever witnessed.

Although the LGBT community has made strides toward equal rights across the world, there is still so much work to be done, especially in the US. In particular, there are 32 states that still do not have fully inclusive LGBT non-discrimination laws. Then, there are some states like Mississippi and North Carolina which have passed actively discriminatory laws toward the LGBT community. Yesterday, I was reminded that we all need to work together to ensure equal rights for all. LGBT issues are not just a “gay community” issue– they are human rights issues. As MLK once said, “Injustice anywhere is a threat to justice everywhere.”

After an amazing dinner at Brasserie 66, I turned in early, exhausted from the activities of the last few days and still recovering from South America! I woke up late on Sunday, put on my newly purchased Irish football pullover, and headed to the pub with Michael to cheer on “the boys in green” in their Euro Cup match against France.

I now truly understand European “football” (aka soccer for those who speak American!). To me, it is most comparable to college football in the US (or at least, the type I grew up around in the SEC!) Each country in Europe is like a state, and their football/soccer team is their source of pride. If Ireland is like Alabama, then the football team is the Crimson Tide. People post Irish flags outside their houses and cars, much like Alabama fans post pennants in the same way.

The atmosphere in the pub was electric. When Ireland scored their first goal and went up 1-0 on France, the floors shook from the noise and celebration! Unfortunately, Ireland went on to lose the match, but the fun (or “craic” as they call it in Gaelic) continued. This reminded me of Ole Miss football…win or lose, the party continues!

After another restful night, I am ready to explore Dublin a bit more today, and then the rest of the country later in the week. Ireland is just getting started!