As is evident I’m sure from my last few posts, my time in Paris was wonderful. On Tuesday morning, I woke up ready to knock out a few administrative tasks (laundry and finding a new computer charger and portable phone charger-which had also died) so I could then get back to enjoying the city. I found a laundromat near my hostel, and after figuring out how to work the machines (in French!), I enjoyed an espresso and a book at a cafe next door while waiting on my clothes to finish. It’s funny how I assumed I would be doing my own laundry in the sink throughout the trip when I started-I haven’t done that a single time! Instead, I’ve been able to find either cheap laundry services or easy do-it-yourself machines. I guess I’m not roughing it as much as I planned!

With that necessary task out of the way, I headed off to visit the Musee d’Orsay, one of the museums in Paris I was most looking forward to visiting. Musee d’Orsay is a converted train station and has several early and post-impressionist works, as well as a wide collection of sculptures from Rodin and Degas. 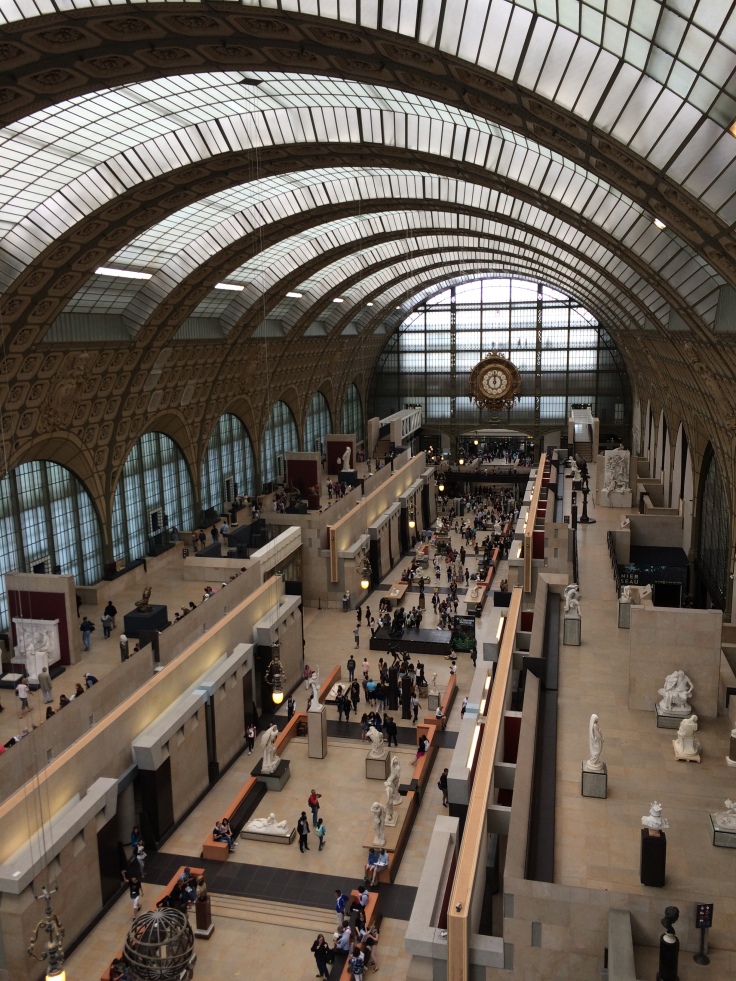 This painting, Le Dejeuner sur l’herbe by Edouard Manet, is most famous for being one of the earliest works that sparked the impressionist movement. The woman dining stark naked on the grass with fully clothed companions and looking directly at the viewer was considered very controversial in the art world at that time. 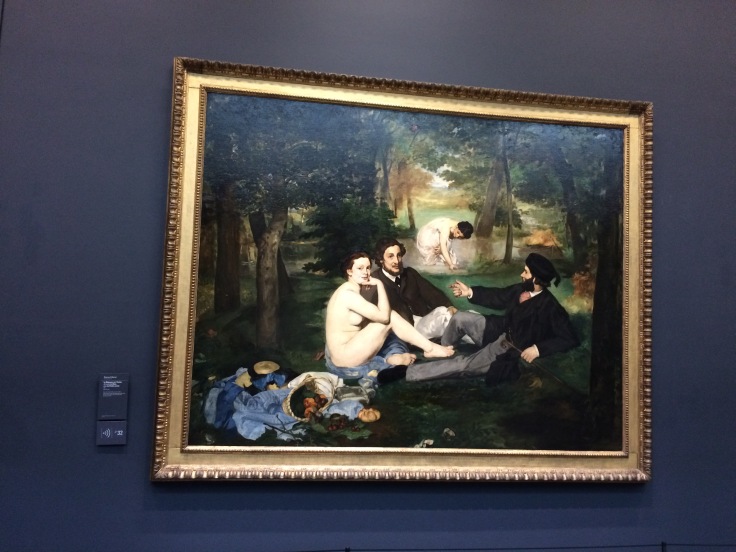 This painting, Starry Night over the Rhone by Vincent Van Gogh, is fairly well-known…I was excited to see it because I had a print of this in my dorm room and then my bedroom for a few years! 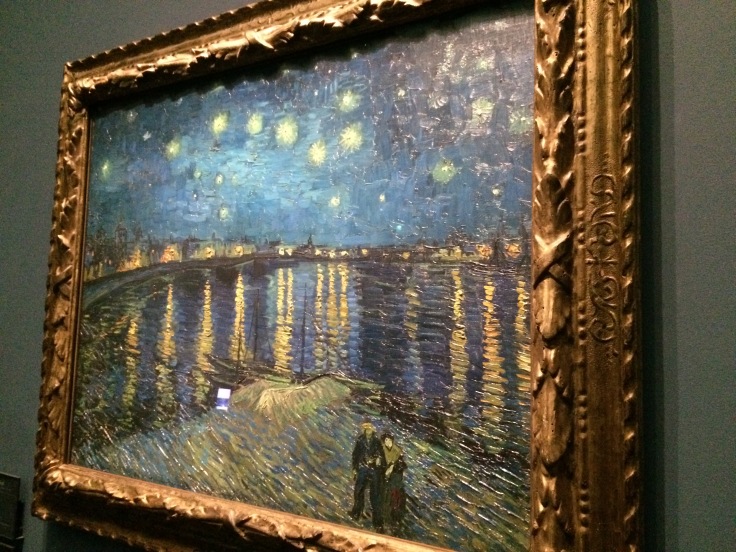 It was also neat to see other famous works by Claude Monet, Edward Degas, Paul Cezanne, and Gauguin.

The Musee d’Orsay also had an exhibition of the works of Henri Rousseau, including a display of his famous The Dream, which is on loan from MOMA in NYC. I have seen the painting before there a few times, so it was cool to see it again in Paris!

After the Musee D’Orsay, I decided it was time to find my replacement electronics. I found my way to what was soon to become my most-visited place in Paris, FNAC. FNAC is a great store and is like a combination of Best Buy and Barnes and Noble in the US. I quickly found a portable phone charger and a new book (they had a good selection of books in English on one wall), but the computer charger was another story-they didn’t have it. They sent me to a store that specializes in every type of battery imaginable. They, too, did not have one that would work. Disillusioned, I began the walk across the city back toward my hostel (like NYC, Paris is very walkable, and it takes no more than 45 minutes to really walk anywhere within the main city). I happened to come across a PC repair shop along the way, and decided to give it one last shot. It was closed, but the man saw me peering in the window and graciously let me in to try to help me. After a few minutes of looking through parts, he announced I was out of luck.

As I was tired of running errands, I decided to stop at a cafe and finish my book over a coffee. I highly recommend We Are Called to Rise by Laura McBride! It is her debut novel, and I was blown away. After shedding a few tears over the ending, I decided to walk another 45 minutes to visit the Arc De Triomphe. Of course, it reminded me so much of Washington Square Park in Greenwich Village NYC, home of the NYU Law campus. This, then, reminded me that law school starts next month. I feel like it’s been a long time coming, and I can’t believe the time is almost finally here to start this chapter of my life. 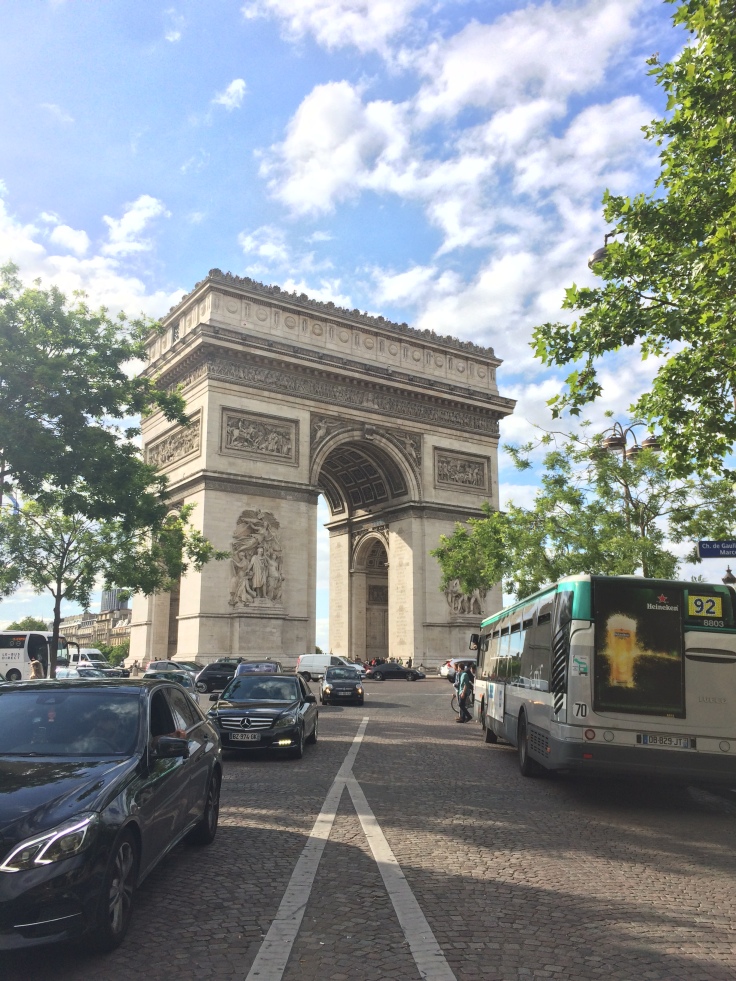 From the Arc De Triomphe, I decided to visit the Bastille. Once I arrived, I was surprised to learn the Bastille actually doesn’t exist anymore! Instead, it’s just a city plaza with cafes and an operahouse. So, I read about what the Bastille was and its significance in the French Revolution while having a glass of wine outside a cafe.

The next morning, I set off for the Louvre. I had booked a timed entry ticket online a few days earlier (only 15 euro directly through the museum), so I was able to skip the massive queues (i.e. lines) and walk right in! Like the Met in NYC, the Louvre has an extensive collection of ancient artifacts as well as medieval, Renaissance, and Baroque art. Of course, I saw La Gioconda (the Mona Lisa). She draws some serious crowds! 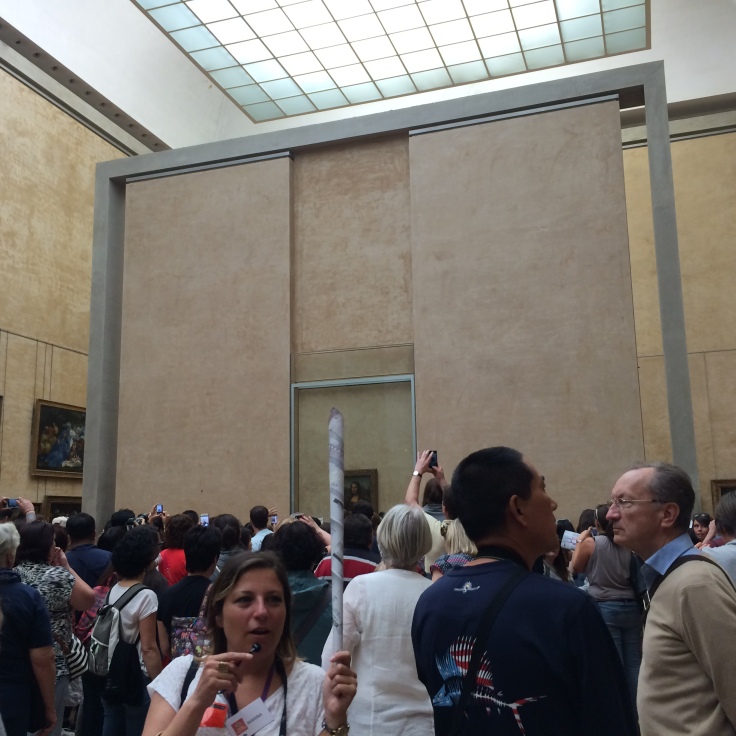 I also saw works by Botticelli, Raphael, and Titian. I think my favorite painting I saw was Lady Liberty Leading the People by Eugene Delacroix, painted to commemorate the French Revolution.

I also saw this work, The Death of Marat by Jacques-Louis David. Marat was a revolutionary journalist who was assassinated during the French Revolution. He is painted to resemble a Christian martyr in the baroque style, symbolizing the spiritual significance of the revolution. 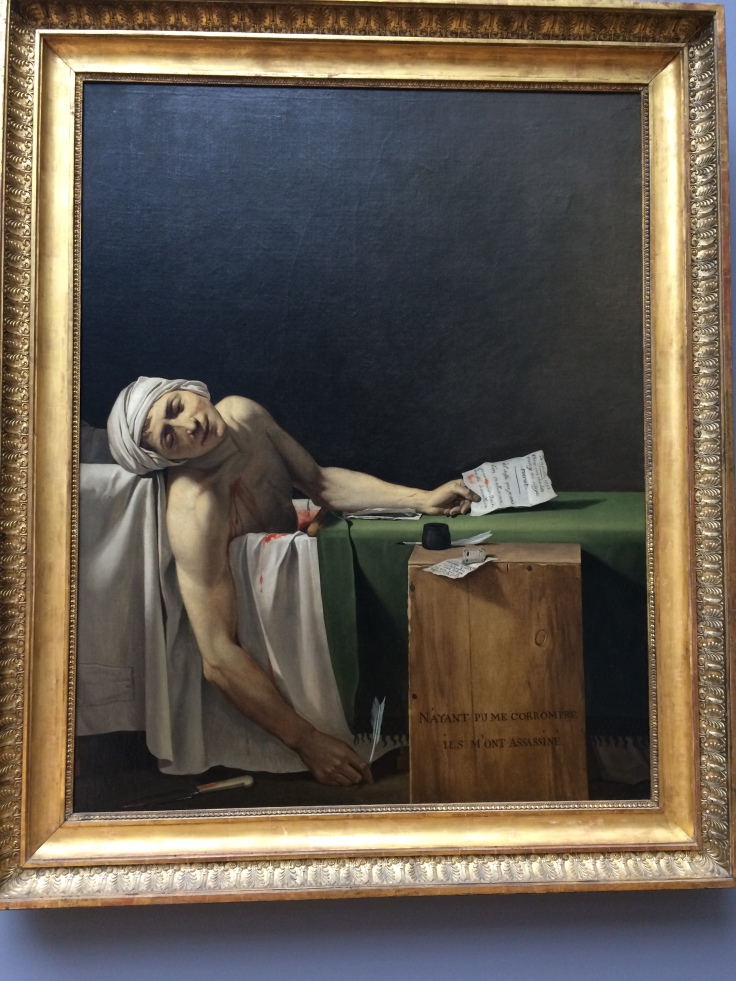 I also enjoyed seeing the African, Greek, and Egyptian exhibits in the museum, as well as learning that the Louvre was originally a fortress built to protect Paris that was later turned into a palace and then a museum.
After several hours at the museum, I walked south of the Seine and had lunch at a sidewalk cafe with my new book (The Unbearable Lightness of Being by Milan Kundera) before heading to the Luxembourg Gardens to take a nap in the grass. The nap turned into a journaling session (with pen and paper in a real notebook!), and this made me realize how much I missed writing. I knew what I had to do–I went back to FNAC to buy a new tablet (I can use this in law school, so a justified purchase?!) This FNAC told me I had to go to the other FNAC on Champs d’Elysses, so I set off for there. I also learned that Champs Elysses is pronounced “shawn-sell-ee-say” rather than “chomps-da-lease.” I am so appreciative to the endearing French gentleman who taught me this–I am used to being (lovingly) teased for my southern USA accent back in NYC, but he taught me in the least condescending way possible– another testament to the genuine hospitality of the French I have experienced! Vive la France!

Once at the other FNAC, I invested in my little French tablet. I could not understand a single word once I opened it and started using it, which I quickly realized would be a problem. To fix this issue, the FNAC worker spent an hour converting it to an “English” computer by “downloading the English language.” Even though my computer is now in English, it still greets me with “bienvenue!” which I love! It also has an AZERTY keyboard instead of a QWERTY keyboard– here’s to being multi-cultural!

I slept just 4 hours that night before waking up early to catch a bus to Amsterdam. I had researched trains, planes, and buses, and the bus would take 8 hours but only cost 20 euro. Easy decision for me! The bus ride was actually quite nice…after spending so many hours on my feet the last few days, it was great to sit still in one place for a few hours. We stopped in Gent and Antwerp in Belgium along the way, and arrived in Amsterdam on time!

Until next time, Paris!! 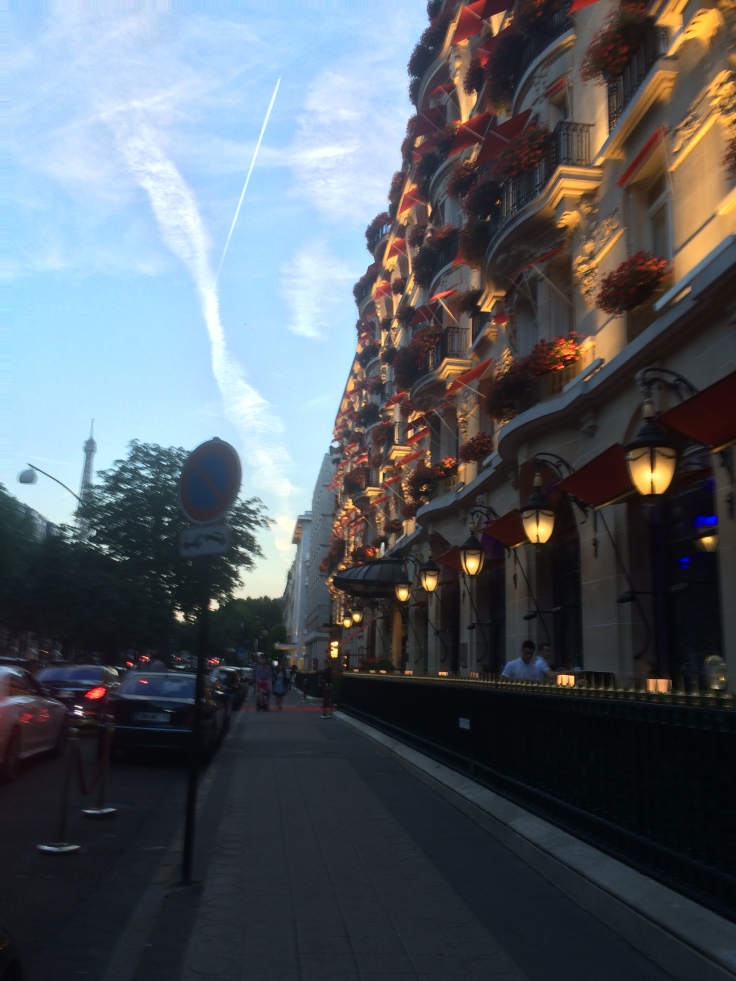