I’ve Got My Head in the Clouds 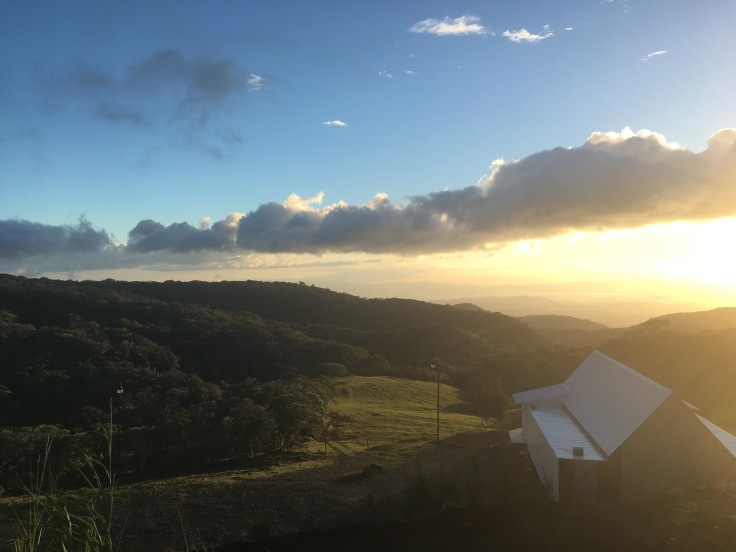 Monteverde has been a complete 180 from the pace and climate of Manuel Antonio. I am amazed that two destinations that are so different can exist in the same tiny country. As different as these towns are, they both have Pura Vida in common.

Getting from Manuel Antonio to Monteverde was an adventure in itself. I had 2 options- a private transfer service that would last 5 hours and take me door-to-door with air conditioning for $50, or the public bus that would last 6 hours without air conditioning and with a transfer in Puntarenas for $8. Of course I chose the public bus! Not only did I save money, but I enjoyed getting to know a few locals along the route. I also met some girls from Germany and France who had the same idea I had. I definitely recommend taking the public bus here if a) you don’t need air conditioning (I’m from the South so I’m used to the heat!), b) you’re fairly confident in your Spanish (most of the people I met in the stations didn’t speak English, and you’ll need to communicate as the terminals can be confusing), and c) you’re a student and want to save money!

Monteverde is a small village located in the Costa Rican cloud forests, and was founded by Quakers who left the USA in the 1950s to avoid the draft for the Korean War. As our bus climbed up into the mountains from the sea, I could feel the temperature dropping. We were also graced with this amazing view along the road. 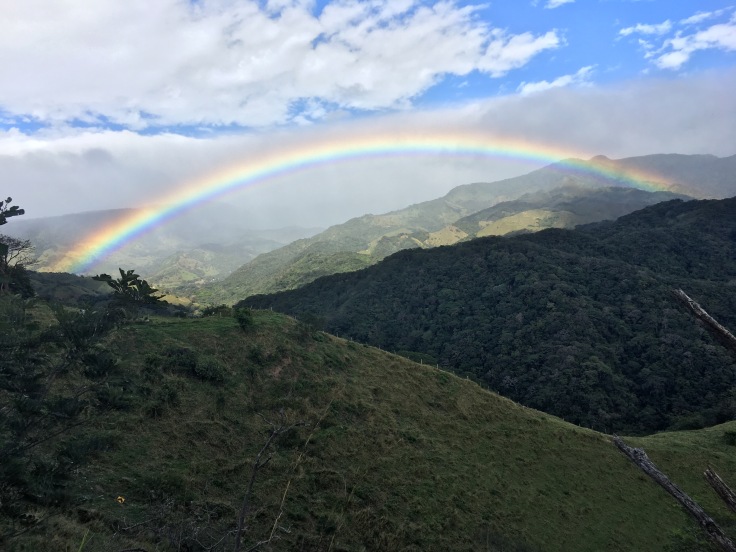 Once the bus dropped me off in Monteverde, I found my way to my bed and breakfast, Cabinas Vista Al Golfo. The climate had completely changed from Manuel Antonio– cold, rain, and wind replaced the scorching humid heat of the coastal area.

It was so windy, I only left Cabinas to visit an ATM, get dinner (ceviche and Imperial of course!), and invest in a pair of $10 fleece-lined leggings for the cold night ahead (so comfy!) I came back, showered, and crawled into bed with a book as the wind howled outside my window. It sounded like a hurricane, or at least a tropical depression. My private room had no electrical outlets, and I had to go outside to access the bathroom, so it was pretty much like glamping.

The next morning, I woke up early to hit the trails at the Santa Elena Reserve. As Santa Elena is located in a true rainforest, I spent about 3.5 hours hiking the accessible trails in the rain. Fortunately, I was able to rent mud boots there for just $2. There’s no way I could have done this trek in my regular sneakers without ruining them!

The views from beneath the canopy were so peaceful and beautiful, and I often found myself stopping just to take long breathes of the clean, fresh air. I definitely got a lot of thinking, meditating, and praying in on this trek.

I was soaked to the bone following the trek, but very energized. As I drank a coffee to warm up following the hike, I met this friendly pizote who decided to visit the cafe area!

The rain finally stopped when I returned from Santa Elena, so I sat outside in the sun to dry off while I wrote a few postcards. After visiting the post office, I stopped by the Monteverde Outdoor Center, where my new friend Clayton had helped direct me to Cabinas the day before. Andres, another new friend there, recommended I spend the rest of the afternoon hiking in Bosque Eterno de los Ninos, or the eternal children’s forest.  We also had a very interesting discussion about how climate change is affecting the rainforests and weather patterns here in Costa Rica. I took his advice, and my cab driver Laulo drove me out to the reserve, where I spent the next 2 hours hiking!

The reserve is named for a global effort of school children from over 40 countries to save the rainforests by raising enough money to purchase the land for the reserve. ❤ Even though it is near Santa Elena, the two forests are different ecosystems. I saw so many butterflies here! 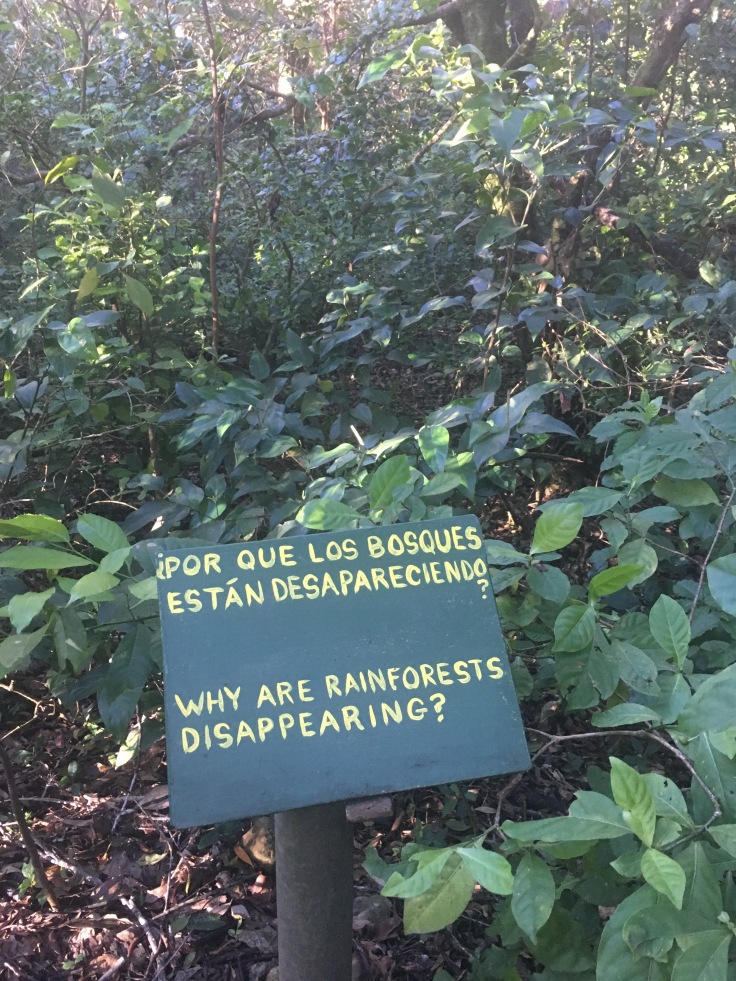 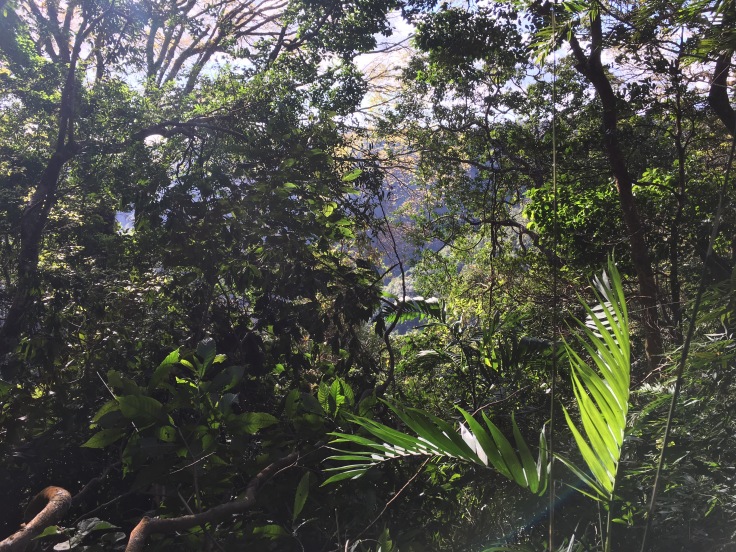 Instead of calling another cab, I walked the 30 minutes back into the city, which turned into a beautiful, third hike on its own. The sunset over the cloud forest was muy bonita! 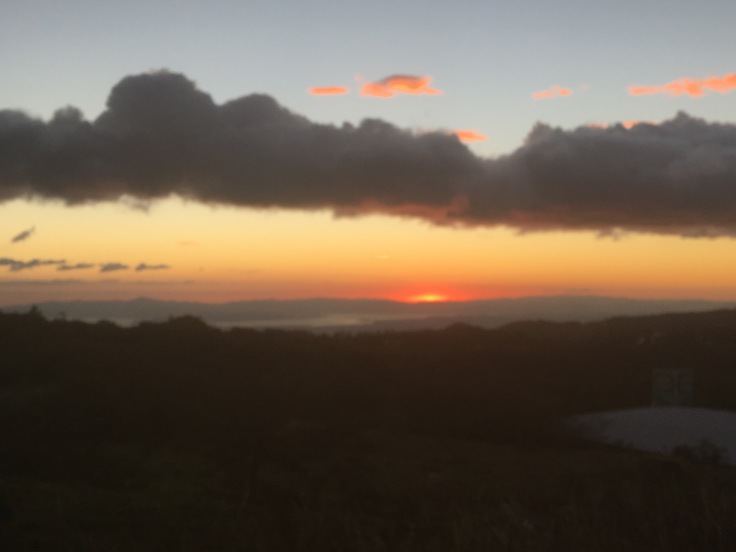 Laulo forgot to charge me for my cab earlier, so I stopped back by Monteverde Outdoor Center to leave the money for him with Andres and Clayton, who know him. I was really impressed with how helpful they were on my 2 days in Monteverde, and I encourage anyone visiting this mountain village to check in with them! They also do private tours, including night walks, and offer good advice in general (for example, after hearing of my love of ceviche and Imperial, they recommended a local spot called Barvilla to me, where you get free ceviche with an Imperial! It did not disappoint!) I also ran into a nice Canadian couple I had met back in Quepos when I was leaving… el mundo pequeno!

If you’re in Monteverde, please stop by Monteverde Outdoor Center and tell Andres and Clayton I sent you!

Also, Monteverde can be expensive if you want to do all the zip lining, bungee jumping, etc. Fortunately, I got my zip lining fix at Abby’s bachelorette weekend earlier in the year, so I wasn’t as tempted. I just wanted to hike. I was able to get into Santa Elena Reserve and Bosque de los Ninos for $7 and $10 respectively, with a student discount. All money goes toward preservation and upkeep efforts. Be sure to budget for the other activities if you want to do those while here! 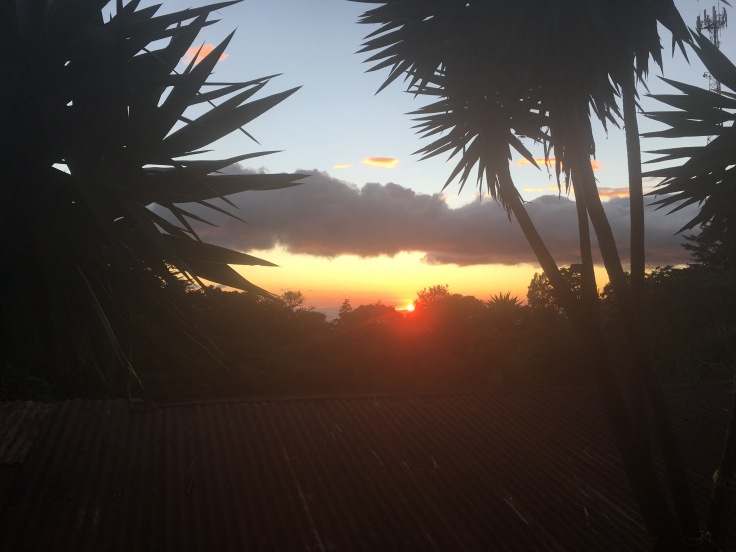 2 thoughts on “I’ve Got My Head in the Clouds”