John 12:23-25: “Jesus replied, “The hour has come for the Son of Man to be glorified. Very truly I tell you, unless a kernel of wheat falls to the ground and dies, it remains only a single seed. But if it dies, it produces many seeds. Anyone who loves their life will lose it, while anyone who hates their life in this world will keep it for eternal life.” 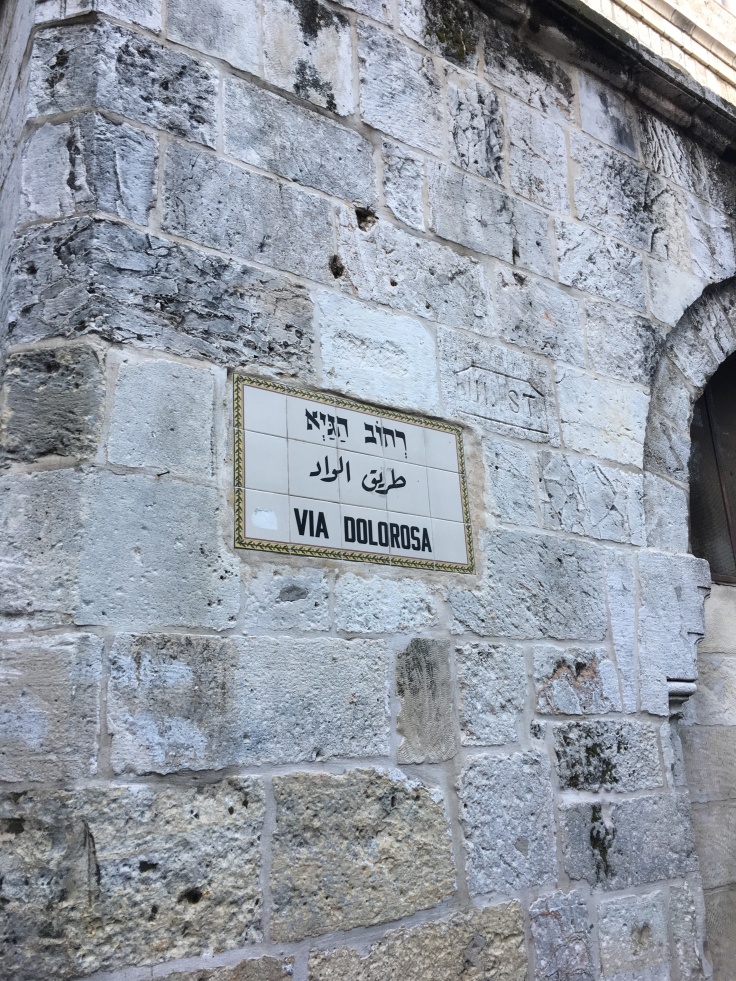 After our morning at Masada, we loaded up our bus and hit the road towards Jerusalem, one of the most anticipated stops of our trip. The city holds holy sites for Christians, Jews, and Muslims, and contains literal layers of history dating back millennia. King David designated Jerusalem as the capital city of the ancient state of Israel 1000 years before the birth of Christ.

My new Israeli friend described what Jerusalem meant to him this way–“I am not even a religious person, but everytime I visit Jerusalem, I feel the holiness.”

As we drove through an underground tunnel, I saw the famous skyline with the old city walls and Dome of the Rock appear as we exited the other side. I immediately understood my friend’s feelings–the holiness and oldness of the city will move you.

We entered the Old City walls (which aren’t that “old” considering they were built about 500 years ago by the Ottoman empire) through the Jaffa Gate. During our time in the Old City, we visited the Church of the Holy Sepulchre, the Via Dolorosa and the stations of the Cross, and the Wailing Wall. Unfortunately, our time in Old Jerusalem was cut short due to the faulty cable car at Masada and a packed schedule, but I am still absorbing all we took in during our time there.

Church of the Holy Sepulchre. This church is built upon the place traditionally regarded as Calvary/Golgatha (the hill where Jesus was crucified) and the nearby location of his tomb. 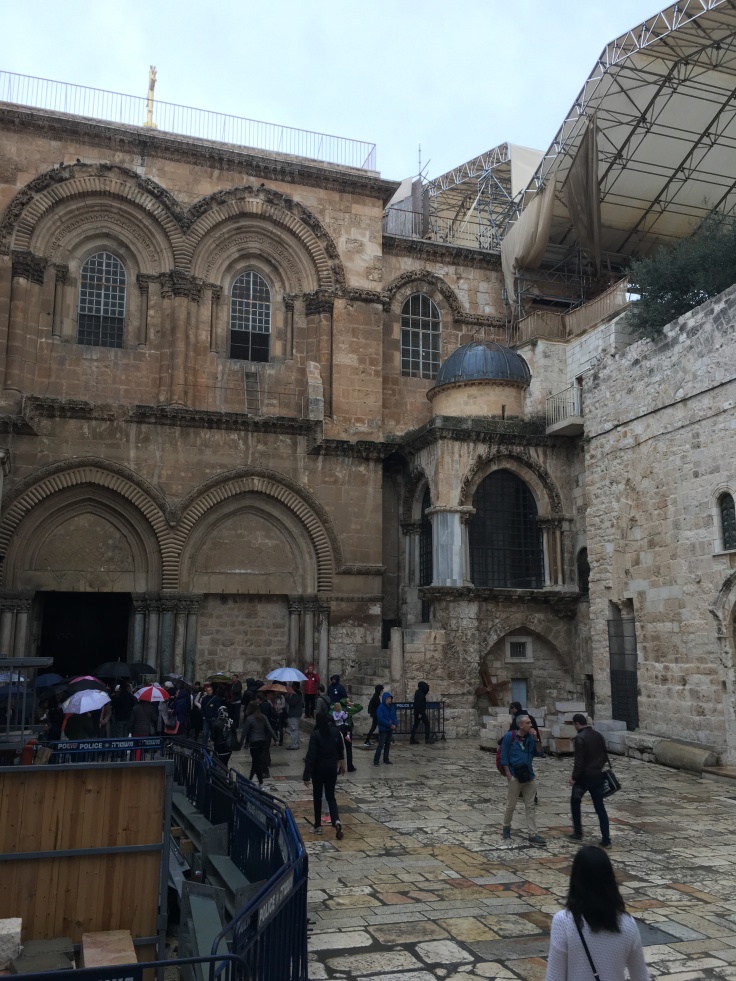 Three of my trip friends and I came directly here as our first stop during our 2 hours of free time before the group tour. Even though we would be visiting it later with the larger group, we wanted to ensure we had time to wait in line to be able to step inside the empty tomb.

After waiting about an hour and 15 minutes, we were able to enter the empty tomb of Jesus. We first stood in a small foyer (maybe only 5×5 feet) where we were able to gather around a piece of the stone that was rolled away from Jesus’ tomb. Then, we stooped to enter into a small cave which was the actual tomb, and were able to kneel before a small alter located where his body had laid. The tomb was much smaller than I had always imagined.

As we knelt together, it was difficult to form any thoughts, as I was completely overwhelmed by the moment. I did not take any pictures.

Luke 24:1-8: “On the first day of the week, very early in the morning, the women took the spices they had prepared and went to the tomb. They found the stone rolled away from the tomb, but when they entered, they did not find the body of the Lord Jesus. While they were wondering about this, suddenly two men in clothes that gleamed like lightning stood beside them. In their fright the women bowed down with their faces to the ground, but the men said to them, “Why do you look for the living among the dead? He is not here; he has risen! Remember how he told you, while he was still with you in Galilee: ‘The Son of Man must be delivered over to the hands of sinners, be crucified and on the third day be raised again.’ ” Then they remembered his words.”

Later in the afternoon, we were able to visit the Church again with our larger group and climb the short but steep stairs to the top of Calvary/Golgatha. Here, an alter rests atop the actual stones of Calvary, which are visible in glass below. Many people shuffled on their knees to the alter to kiss where the cross is believed to have stood. I was overwhelmed with awe, and words can’t really describe what it was like to be here.

Before leaving the Church of the Holy Sepulchre for the last time, I was able to touch the stone upon which Jesus’s body had laid inside the tomb. The stone is anointed with oil, and visitors are invited to rub cloth or another relic upon the stone. As I said a prayer, I touched the small stone from my time in the Judean desert the night before to this stone. Again, I felt like I didn’t deserve to be here. In this moment I felt grateful for how the story of Christ’s teachings and sacrifice transcends geography, time, and seasons of doubt, and can be both universal and personal in every sense.

Via Dolorosa and the Stations of the Cross. The Via Dolorosa is the street along which tradition holds Jesus carried his cross to Calvary. In that time, the Via Dolorosa and Church of the Holy Sepulchre would have been outside the main city center of Jerusalem, even though they are now within the “Old” City walls. We were a bit rushed as we moved along the road from station to station, given our time and schedule constraints. This was the only moment on the entire trip I wished I had traveled here alone–so I could take in the gravity of this place without feeling like I was running down the street. Nevertheless, it was a meaningful experience, and Doron did a great job explaining each of the “stations”–places along the street where various things happened as Jesus carried the cross (for example, the three times Jesus fell with the cross are represented by three different stations).

Wailing Wall. Our last stop in the Old City was the Western Wall, also known as the Wailing Wall. This is a holy site in the Jewish faith, as it is the only remaining part of the temple built by King David and King Solomon. The wall represents the holiest place where Jews are permitted to pray, with the holiest place of the faith (the Temple Mount) located just beyond (where the current Dome of the Rock – the mosque marking the place where it is believed the prophet Mohammed ascended to heaven in the Muslim faith – stands). 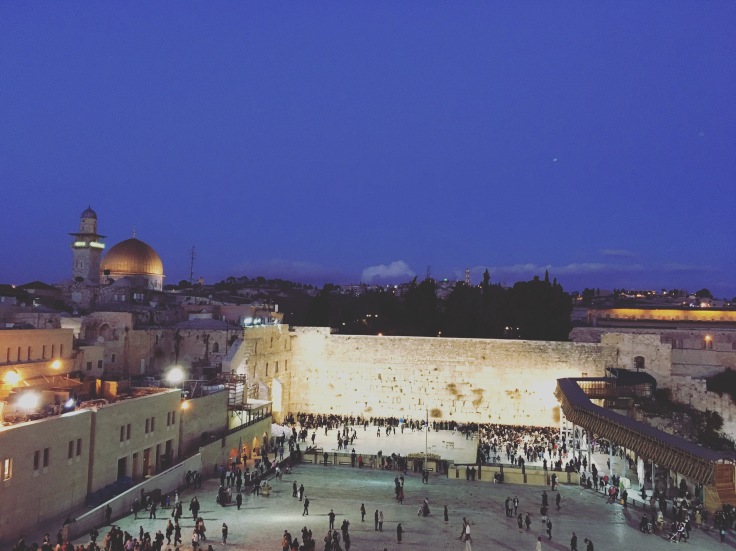 Men must enter and remain on the left side of the wall, while women must enter and remain on the right side. The left side is about twice as long as the right, so the side I visited was relatively crowded. Before entering, we each washed our hands 3 times at the basin just outside the gate while Hannah recited the traditional Jewish blessing for us.

Upon entering, I was immediately humbled by the devotion and reverence I felt around me of those women praying and reciting the Torah. Some were moved to tears. I found a small piece of paper in my bag and wrote my prayer to God, then worked my way slowly through the crowd so I could touch the wall and leave my paper with the thousands of others.

To leave the wall, you must walk backwards without turning your back to the wall out of respect and reverence. As I walked backwards, I saw a young man who looked like a lost tourist enter on the women’s side and take a seat at one of the many lawn chairs scattered across the way. It took him about 30 seconds to realize his mistake, at which point he jumped up and left with a bewildered look on his face. I couldn’t help but laugh a bit.

After an extremely long and fulfilling day, we enjoyed an amazing dinner at Chakra and a night out before gearing up for our second day in Jerusalem (next blog…Yad Vashem and the Israeli Supreme Court). I regretted we did not visit any of the Muslim sites and that I didn’t have a chance to visit the Garden of Gethsemane at the Mount of Olives, but hopefully I will be able to travel here again someday!