As much as I love Kampala, it didn’t take long before I was ready to get outside the city and get my nature connection going. In just two nights of camping at Lake Mburo last weekend, I managed to accidentally get lost in the bush for an hour with 3 children from a local village, pass out from dehydration, and have the best time with a group of new friends from Kampala—it was truly a “wild” time!

My special connection to camping in Africa started a year and a half ago when I took a spur-of-the-moment trip to Zambia, Zimbabwe, and South Africa during Christmas 2015. I had just gotten out of a long-term relationship, and was starting to feel like I didn’t want to work in finance forever either after 3 years. So, instead of going home to Mississippi/Alabama for the holidays as usual, I decided to go on a mind-clearing, soul-searching trip by myself to…Africa!! Granted, I had never camped before in my life, and had never been anywhere besides Europe and Mexico at this point, but I figured, why not!?

This trip truly changed my life, and I credit my 10 days in the wild with giving me the perspective I needed to set some decisions in motion and fully live out this “quarter-life crisis” thing. I also made some amazing friends who continue to be very dear to me. As cheesy as it sounds, I feel like I found part of myself sleeping under the stars and amongst the wildlife in southern Africa that Christmas. 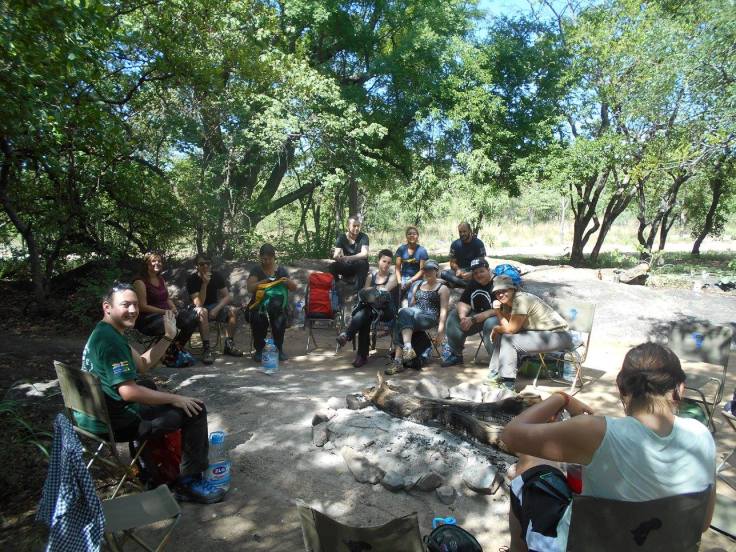 So, when I had the opportunity to travel to Lake Mburo in western Uganda and camp for three days last weekend with some new friends I had made over the last few weeks, my unequivocal answer was yes! The Mihingo Lodge was hosting its annual marathon/half-marathon/10k/5k/mountain bike race to raise funds for conservation, so my new American friend Carissa and I immediately started looking up tent and sleeping bag rentals and transportation to the park. We were soon joined in the planning by our new British friends Nick and Shaun, as well as Carissa’s school friend Charles (whom I had also met in the airport the night I arrived!).

After almost getting ripped off by a guy from Facebook who wanted to charge us a 30 USD “delivery fee” for renting his camping equipment, Carissa and I decided just to buy our own equipment from the local store Game (it’s a Ugandan chain store owned by Wal-Mart, and it sells just about everything). Friday was Hero’s Day in Uganda, and as all offices were closed, we were able to set off that morning with a ride we had found (also on Facebook…there’s a “Kampala Ex Pats” page). I rode to our meeting point loaded down on the boda with my tent, 2 sleeping bags, and backpack…it was quite the sight.

We arrived at Lake Mburo that afternoon after crossing the Equator (!), and Carissa and I pitched our tent near our friends. 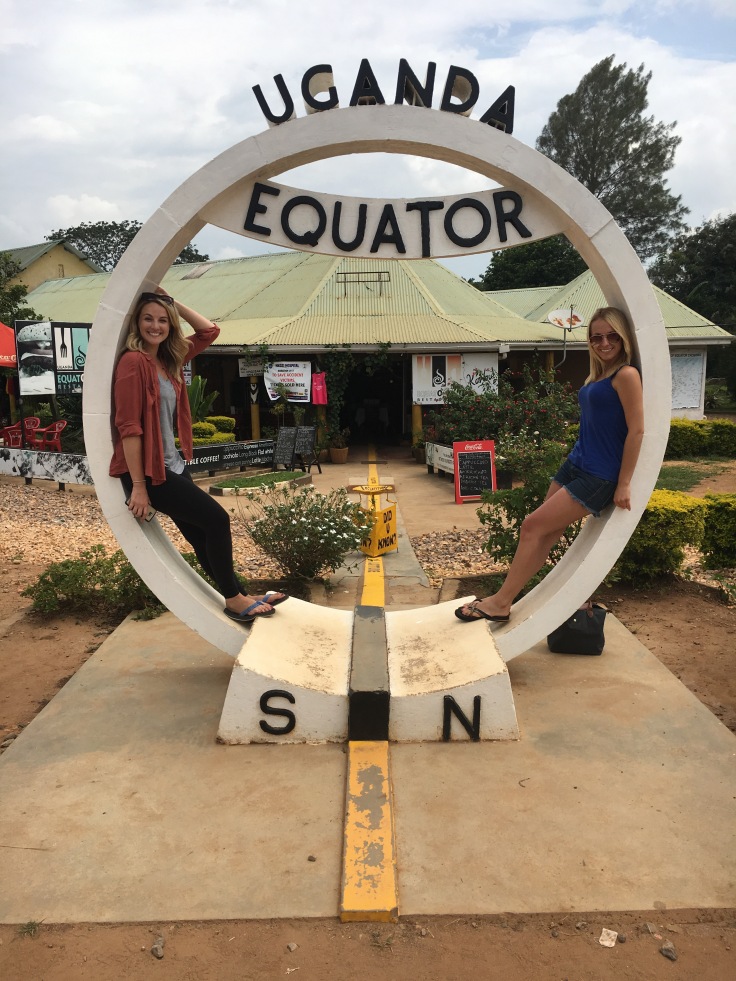 The delicious camp meals were served from a “kitchen” tent, and we all enjoyed some pasta and drinks before turning in. The bathroom situation was pretty much non-existent—the toilets were holes it the ground surrounded on 3 sides by a screen, and the “showers” were buckets hanging from trees that never seemed to have water. However, this was all part of the fun!! There is freedom in being dirty!

The next morning, it was time to race. Even though I used to run all the time and finished a marathon just before my last Africa trip, I barely do anymore, so I signed up for the 5k with Shaun, Charles, and tons of children from local villages (lol). The rest of our camping group decided to do the 10k with the rest of the adults, so I was at least happy to have some fellow underachievers in Shaun and Charles. 🙂

At around 8am, we set off. Shaun and Charles quickly left me in the dust (lol), but I had a new running buddy—this little kid from a local village. He didn’t speak English (they speak luyankole in this part of western Uganda) so he couldn’t tell me his name, so I called him “Little Dude.” After running along beside me for the first half-mile, Little Dude dropped back to within 5-10 feet of me for the rest of the race. 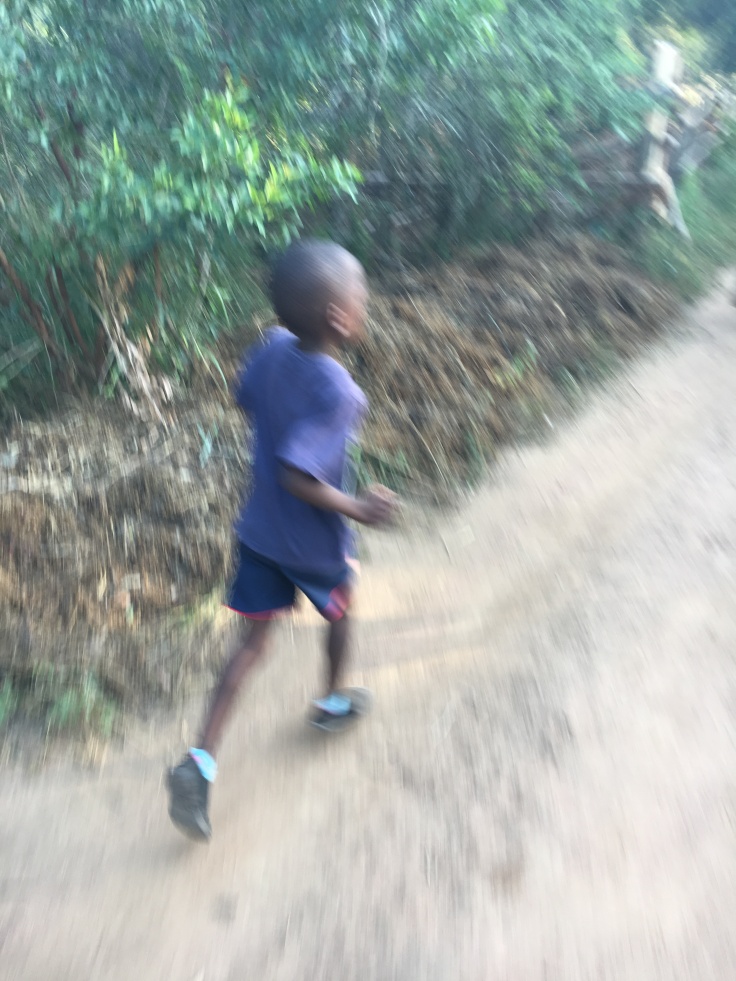 I should have known something was up when it was just me and Little Dude (LD) on the trail. In one of my worst blonde moments ever to date, I thought the blue arrows were for the 5k and the green arrows were for the half-marathon. In reality, it was reversed. As I followed the blue arrows, Little Dude followed me, and before too long it was just me, him, some zebras, and the occasional mountain biker.

This didn’t feel right. “Are we going the right way?” I asked LD. He just grinned at me blankly. After 40 minutes, I knew we should have finished the 5k, and we were officially lost. Ironically, LD and I came across two more local children who didn’t speak English and had also gotten lost on the trail. They too started walking along with me, pointing at the zebras as we passed. (I had given up running at this point!)

“You’ve got an entourage, don’t you?!” said an older British man, as he whizzed past me and my 3 new friends on his mountain bike.

“Haha, I guess so. Actually, we’re lost. Can you tell me how to get back to the campsite?” I asked.

“What a jerk!” I thought. We were at the 1-hour mark, and while I wasn’t worried yet, I knew the kids would need water soon. LD was lagging behind, so I offered him a piggyback ride.

Fortunately, a nice British lady soon passed us on her mountain bike, offered us water and told us the general direction back to camp. We were about 8 kms away at this point! “I’ll send help for you guys from up ahead,” she said as she continued along her trail ride. As we started walking back toward the general direction of camp, a lodge worker soon approached us in a Land Rover…we were rescued!! We shared some good laughs about it in the truck on the way back to camp.

LD and I ended up crossing the finish line at about 1 hour and 30 minutes…my worst 5k time ever!

After relaxing for a bit back at the camp, Shaun, Charles, my new British friend Becky, and I decided to ride around and see more of the park in Becky’s vehicle. After loading up and getting about 10 yards down the dirt road, we had a flat. Shaun and I watched as Charles and Becky expertly started putting the spare on. All of the sudden, my head started spinning and my vision blurred.

“I’ve never felt like this before,” I said, as I leaned against Shaun’s shoulder. While this sounds quite romantic, that’s the last thing it was. The next thing I knew, I was sitting on the ground with Becky holding my hand, Shaun holding a cold bottle of water against my neck, and Charles looking into my eyes (he’s a trained paramedic!) I felt like I was waking up from a nap, but apparently I had fainted. I have never passed out before in my life, and it was a weird sensation!! I drank lots of water and some electrolyte tablets for the rest of the day, and felt completely fine afterward. Moral of the story—don’t forget to drink water after getting lost in the African bush for an hour!

After these near-death experiences, the rest of the weekend was drama-free (thank goodness). We took a boat safari around Lake Mburo later that afternoon, and spotted several hippo, birds, eagles, and warthogs!

Back at the camp, we enjoyed a second beautiful sunset before pulling out our flashlights and playing games before going to sleep. 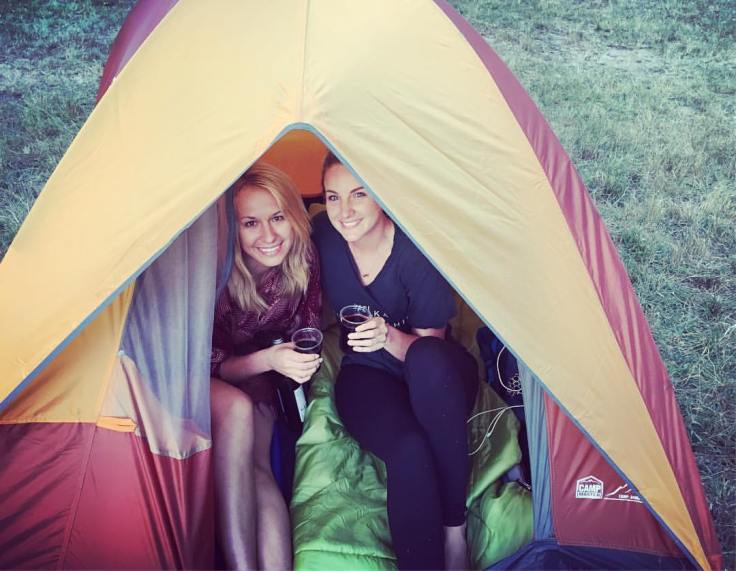 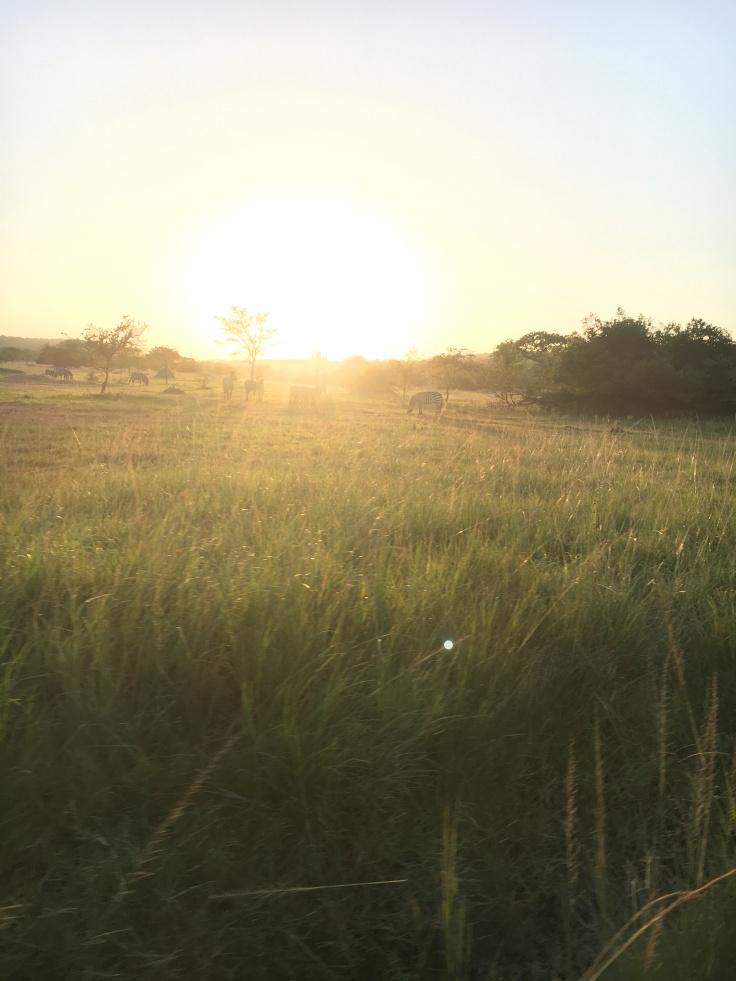 The next morning, we had one last campsite meal, and I enjoyed the “bush coffee” they brew in a huge pot over the  campfire while taking down our tent and packing up. Becky was kind enough to give Carissa and me a ride back to the big city of Kampala (“the big K” as I’ve started to call it), as our previous ride had already left a day early.

You’d think after all the craziness, I’d give up camping for a while…but I am actually going again this coming weekend in Jinja! All I need to do is pay more attention to where I am going, and drink more water. ❤

2 thoughts on “Misadventures at Lake Mburo”