On Tuesday, I got to go on my first road trip across Uganda—north to the town of Lira. It was a rollercoaster 36 hours, in more ways than one.

My reason for travel was professional. My organization was representing a journalist in the town of Lira—we will call him “J”—who had been arrested one fateful evening just before the presidential election last year during the airing of his radio political talk show, along with four other politicians. J and his co-defendants had been kept on trial for 16 straight months without the state producing a single witness for the “crime” of alleged defacement of political posters. The irony is that J could not have been involved with the defacement as he was on the air during the time the act occurred. Nevertheless, he was relentlessly prosecuted as part of an effort to chill political dissent and freedom of expression. Our client made 12 consecutive appearances before the court over this period, and each time the court would adjourn and require his presence at the next hearing, presumably until the state could produce witnesses.

Our client’s rights were being violated under both Ugandan law (Article 28(1) of the Constitution) and international customary law (the right to a fair and speedy trial). So, my organization sent my colleague K, an attorney on staff who focuses on litigation, and me north to Lira to argue for the dismissal of the charges.

K and I set off on our journey from the central bus station of Kampala. We had two options for bus travel—the GaaGaa Coach and the Baby Coach. Both were public buses without air conditioner that cost 20,000 shillings one way (about $5), yet the GaaGaa coach was known to be slightly more comfortable and organized. Of course, we missed the GaaGaa coach by 5 minutes, so we booked our tickets on the infamous Baby Coach.

After sitting on the bus for about 1.5 hours as they changed tires and continued to load more customers in, we started down the road out of Kampala north toward Lira. K and I were pretty cramped on the Baby Coach, as the tiny “baby-sized” seats were covered in plastic and super sticky. But once the bus started rolling, the fresh air made the circumstances more manageable. In accordance with what I am coming to realize of “Africa time,” the 4 hour drive took about 7 hours.

One thing we were not lacking on this road trip was snacks! My favorite part of the trips to and from Lira was when the bus would pull over and local vendors would swarm up to our windows, selling their goods. Sometimes, if they spotted me, I would hear “Muzungu! Muzungu!” from down below. (Muzungu is Luganda for white person haha). At almost every stop, I tried to buy something new…I enjoyed the gonja (roasted banana-like fruit), g-nuts, and cassava (a roasted root that tastes like mashed potato). I didn’t try the meat on a stick (still vegetarian these days!), roasted corn, jackfruit (because I don’t like it), or Rolex (chapatti—a Ugandan bread—with egg wrapped inside), but they were selling all of these things as well. They also sold live chickens to any interested buyers! 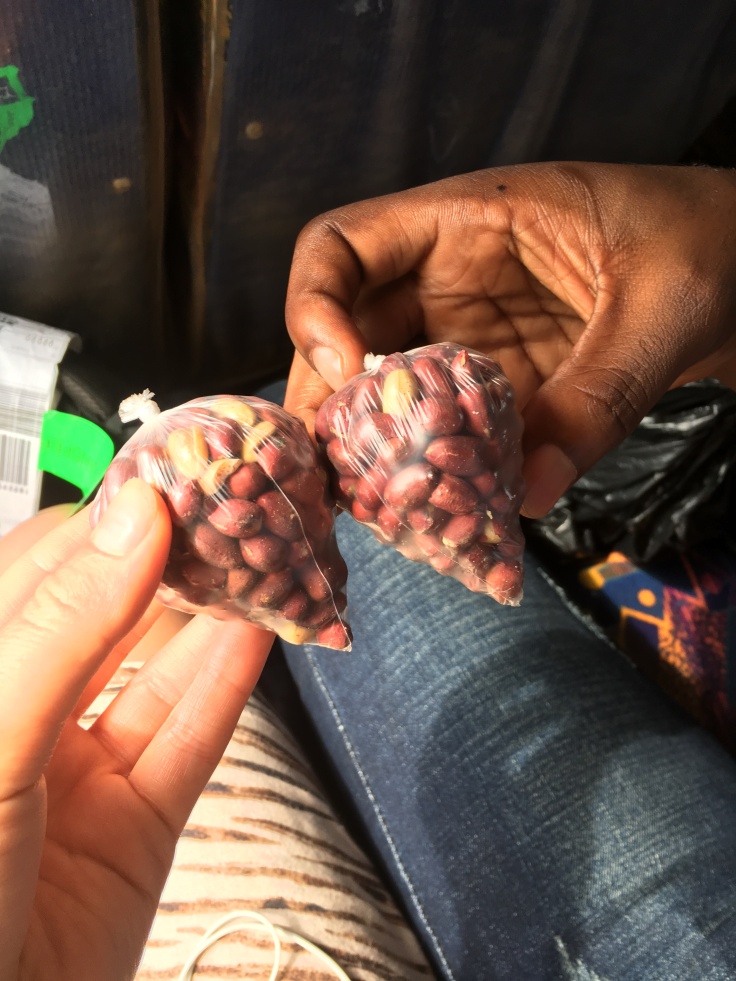 We also passed over the Nile and saw several baboons about halfway along the journey, and spotted many obusisira, or traditional hut-style houses along the way. 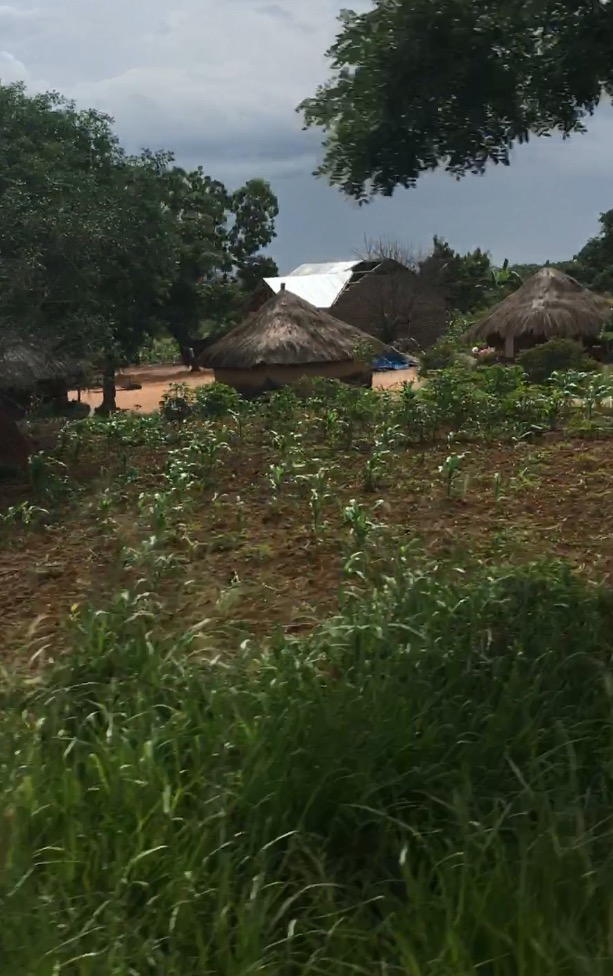 Once we finally arrived in Lira, our mission came into sharper focus. We first met with J and gave him our assessment of the facts and the applicable law. “I pray to God this is over with tomorrow and I can be a free man again,” he explained. It was clear the case had taken a toll on J physically and emotionally, as he seemed very tired and worn down.

Given the political nature of our case, our client warned us that he thought we were being “tracked” (this was later confirmed from sources both in Lira and Kampala), and he advised a certain secure hotel for K and me to spend the night. He led us to a small gated hotel just off a dirt road on the edge of town. While this was supposed to be the “safe” hotel, I instantly felt sketched out by this place. Trusting my feminine instincts, I discreetly asked K if we could keep looking, and he agreed.

We then asked if we could stay at the M Hotel, which looked much newer, cleaner, and more secure, but this immediately alarmed our clients. “This place is not safe and there have been many kidnappings here,” they stated. However, after visiting, I for some reason felt way safer in this place than the last place—it was much more well-lit and the staff seemed trustworthy. After finding his cousin was on security detail that night, our client finally acquiesced to allowing us to spend the night here, and allowed me to settle into my room only after thoroughly checking it for wiretaps and working locks. Even though my room “checked out,” I slept with the chair under the doorknob just in case as I was thoroughly freaked out. And it takes a lot to freak me out! Also, it made me feel better knowing K was just 2 doors down. I was so relieved to see we both survived the night to attend the trial the next day!

The next morning, we arrived at the courthouse and met our client J, his brother, and his four co-defendants. Even though we were charged with defending J, K agreed to represent the other four at the request of the magistrate, as he preferred to keep the matters grouped together. Because K is a legal champ, he agreed. (Some judges are called “magistrate” here). We then proceeded to wait outside for 2.5 hours with all other defendants before we were called by the attendant into the chambers.

We spent the time chatting about the case and life in general, and it passed surprisingly fast. I was particularly taken aback by the arrival of the 30 or so male inmates from the jail down the road. They arrived on foot, escorted by prison guards and handcuffed to one another. They then knelt on their knees before the 20 ft x 20 ft cinderblock “holding cell” for about 30 minutes, before they were allowed in.

Once inside the cell, the sound of voices drifted beyond the cinderblocks, harmonizing together to form a song in a language I couldn’t understand, but understood all the same.

“They sing to give themselves hope,” K explained to me.

Finally, it was our time to go before the magistrate. As we entered the chambers, the magistrate immediately looked to me. There is no doubt I stood out, as I was the only muzungu around and also one of very few women present on the premises.

“Are you with CNN or BBC?” he asked me. I couldn’t tell if he was kidding or serious. I later found out he was serious.

“Neither, your honor,” I replied. “I am a law student at New York University, and am an intern with K this summer.”

“Yes, your honor,” I replied. But secretly, I wasn’t sure yet.

K opened with a clear and concise argument—this case had dragged on for 16 months, and our clients’ rights to a fair and speedy trial had been violated. This right is not only given in the Ugandan constitution and in international law, but is a bedrock of democracy. K argued for dismissal of the charges under the Magistrates Court Act Cap 16, Section 119(1) (want of prosecution). After a short response from the prosecution, the magistrate issued his ruling in favor of the defendants. Tears sprang into my eyes as I looked over at J and saw his eyes filling with tears as well. He is now free of the burden of being prosecuted for no reason, and can return to his family in a nearby village to rest and recover from the trauma.

After some congratulatory high-fives and hugs, K and I jumped on some boda bodas to pick up our bags from the hotel, and then to board the bus back to Kampala. We were lucky to book the GaaGaa coach this time around! We had lunch with one defendant at the Divine Mercy café—matoke, dried fish, and rice—before boarding the bus for the 4 hour (lol…7 hour) journey back to Kampala.

As the bus passed back through the beautiful rural countryside, I felt truly grateful that justice had been delivered for J and the four other men that day. However, I couldn’t help dwelling on the maxim “justice delayed is justice denied” and feeling like a part of J will never be healed after being taken, beaten, imprisoned, and relentlessly prosecuted for expressing his political beliefs and performing his job as a journalist. I think the irony is that the more a government tries to suppress the freedom of expression, the louder those voices will rise from behind whatever temporary walls are places around them—much like the prisoners in the holding cell at the Lira court, singing their songs of pain and hope, reality and dreams of a better world.